LAST CHANCE? A LIFETIME OF LIFETIME PLUS WHICH INCLUDES 2 MILLION REWARD CREDITS (RC) PLUS CH HOODIE!   Whats New?
We have 31,349 trainers for 7,463 Games. Get them all with Cheat Happens Premium!
LOGIN | SIGNUP

Welcome to our CHEATfactor Game Review of Elder Scrolls 5: Skyrim Special Edition. We review the game and then factor in how the available cheats affect the overall game experience. For better or worse, our reviews will help you decide whether or not to use cheats when playing the game.

Playing the Skyrim: Special Edition is kind of like taking an old hot rod out of storage. You've shined it up and even given it a nice and shiny paint job, but you didn't even open the hood; hell you didn't even check the oil. As a result it sputters where it should cruise and it's age is obvious. Even so, every mile, glitch, dent and sputter tells a story and there's no better way to experience one of the best games in recent memory; even if it doesn't fix any of the problems that haunted any of it's previous editions.

...the devil and thus the value is definitely in the details. 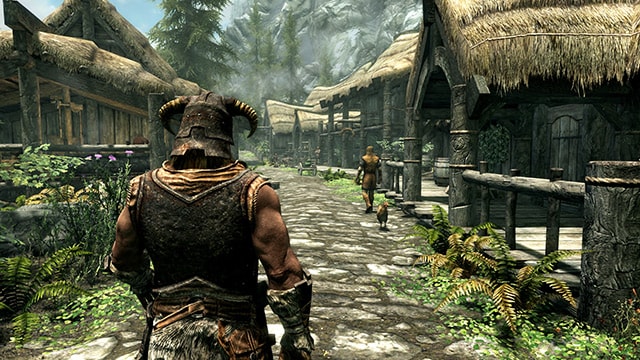 To be fair, I didn't really think Skyrim needed a fancy special edition remaster as my memories of my time running through the forests of mountain peaks of Bethesda's masterpiece are pretty similar to the overhauled visuals, especially when combined with the huge amount of user created mods currently available for the game. A side by side comparison though proves just how much of difference this version is from the last. Be warned though, that difference can be hard to notice at first since Skyrim doesn't go for the sweeping overhaul that many remastered games do these days and many fans were hoping for. Instead, with Skyrim: Special Edition, the devil and thus the value is definitely in the details.

The biggest beneficiary of the special edition treatment is the game's lighting systems which stand out, especially when the game is played on maxed out settings. Skyrim has always had amazing vistas to take in and while they're mostly the same here in the Special Edition, there's a definite feeling of there being more here. Colors pop more than they ever have and you can definitely take in the finer, more minute to minute details. Technically speaking, Skyrim's Special Edition is 64-bit rather than the orignal's 32 so it can handle some of the game's bigger moments but to be honest I never really felt like it was much of a noticeable change at all. I wanted to believe that there was more here, that this was the version that stood out above all else but it never really convinced me of it or really even tried to do so.

That's the thing about Skyrim: Special Edition, it almost unapologetically lacks anything new besides the cleaned up visuals. This is exactly the same game you've been playing for five years with a fresh coat of paint. All of the DLC is bundled in, but it also was with the Legendary Edition released a few weeks ago. Skyrim is less of a game and more of a cultural happening so why not celebrate it for its special edition? Why not include commentary tracks or cut material? The Skyrim community is one of the most dedicated of any medium and they've created so much content that keeps the experience going, why not reward them with even the slightest little bit of extra content? It helps that PC owners who either own the legendary version of the game or the base game and the DLC get the upgrade for free but this re-release of Skyrim is definitely meant more for the console crowd as they now have access to mods, which interestingly enough will most likely need to be reinstalled for PC players due to the bump from 32 to 64 bits.

And trust me, when I tell you that Skyrim's Special Edition includes everything that the five year old game originally had, I mean everything. That includes all of the glitches, bugs and simply five year old textures. The game is still full of moments when the game just plain goes absolutely crazy and “Skyrim gonna Skyrim.” Some of my favorites are when the game randomly decided to load the game's opening completely upside down, or just only load half of the textures in an area. It's dissapointing that these weren't addressed in the game's re-release but then again these imperfections made for so many unexpected moments in my original time with Skyrim, I almost hate to think of someone going through the game for the first time without them.

Skyrim: Special Edition has become the definitive version of Bethesda's classic RPG but it's done so almost by default. The cleaned up textures are nice but it's dissapointing that there's absoultely no new content here. If you already own Skyrim and get the update for free or you've never experienced it at all, this is a no brainer but Skyrim's Special Edition is little more than an update.

Overall: 7/10
Presentation:
7
Gameplay:
9
Lasting Appeal:
9
CHEATfactor:
9
CHEATfactor
CHEATS USED: Add Perk Points, Super Health, Add Dragon Souls, more
Much like the previous trainer for the original game, the trainer from Cheat Happens for the Special Edition of Skyrim is easily one of the better trainers available. There's so much to do in Skyrim and there's always a feature in the trainer that can help regardless of how you're playing the game. Stick with Cheat Happens for more as they become available!