We have 23,572 trainers for 6,141 Games. Get them all with Cheat Happens Premium!
LOGIN | SIGNUP
EARTH DEFENSE FORCE 4.1 The Shadow of New Despair Review
CHEATfactor Game Review by: Joe Sinicki
Reviewed on: PC

Welcome to our CHEATfactor Game Review of Earth Defense Force 4.1: The Shadow of New Despair. We review the game and then factor in how the available cheats affect the overall game experience. For better or worse, our reviews will help you decide whether or not to use cheats when playing the game. 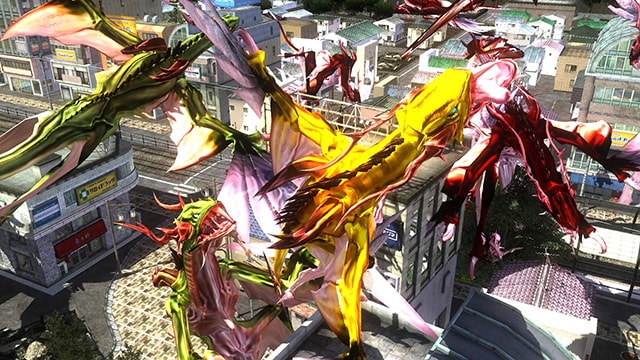 Much like previous Earth Defense Force games, New Despair's plot is pretty straight forward. Giant bugs have invaded and your job is to shoot them. You'll shoot them with riffles and rocket launchers, you'll shoot them with flame throwers and bazookas and that's pretty much the amount of depth you'll get here. The series drips with the type of cheese that you'd expect from an Ed Wood type classic sci-fi movie and all of the production values. None of the characters question why there are giant insects attacking the world much, they just accept it and also accept that the only option is to fill them with enough bullets to make an army blush. If you're looking for a good, serious story don't look here but if you can take your action with a laugh than EDF is perfect for you.

That's mainly because the core gameplay of the series remains mostly pure and untouched so many years later. That's even more funny when you think about how Earth Defense Force really doesn't do much that other third person shooters don't;  if you're using a  gamepad, you move with the left stick, aim with the right and shoot. That's the recipe for nearly every third persona action game but that simpleness combined with everything that makes EDF so unique works so well when put together. For what it's worth though, this is basically a re-release or a re-release with a bunch of added content so if you've played a good number of the previous games in the series, a lot of this will likely be familiar but to be fair that didn't stop me from enjoying it.

Here's how most levels play out; start at one end, find as many giant bugs as you can (don't worry, they'll find you) and shoot them on your way to the other end of the level. Most levels are in a city but there are some that break the formula by taking the action to places like fields, tunnels or subways.You'll choose between classes; either the Ranger which is the most basic, the fencer which is a slower but higher powered attack unit or the Wing Diver; a unit that can attack from above. For what it's worth I rarely changed from the Ranger class, they're the most basic but also the most fun. The classes do work better when combined together through multiplayer though.

...it's all part of the experience and it's all a lot of fun. 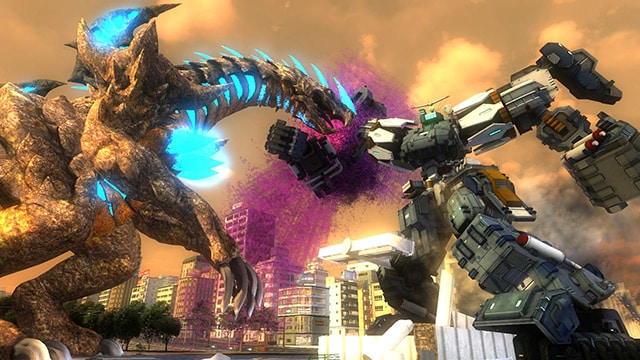 As strange as it may sound though, Earth Defense Force is always at it's best when it forgets what makes a video game "good." The times when the screen fills up with so many enemies that there's really no good way to position the camera, how you're likely to rag doll for a while when running into an unexpected enemy; it's all part of the experience and it's all a lot of fun. Personally I still enjoyed going through and destroying everything in sight, building NPCs, everything and New Despair understands that and still let's me have that uninterrupted fun, which in an age of reboots and re-releases I have to appreciate.

Earth Defense Force 4.1: Shadow of New Despair doesn't change much about the long running series, but it never intends to. It's the same stupid fun you've likely been playing for years, and if this is your first time experiencing the series there's never really been a better jumping on point.  Now get out there soldier, and say it with me now, EDF! EDF!

Overall: 7/10
Presentation:
7
Gameplay:
8
Lasting Appeal:
7
CHEATfactor:
9
CHEATfactor
CHEATS USED: Jet Pack, Infantry Armor, Carnage Mode, more
Any trainer that starts with the words Jet Pack has my attention, and it works well here in Earth Defense Force. That combined with cheats like Infantry armor, ammo and my personal favorite, carnage mode, takes the silliness of a series like this and increases it ten fold. Combining the carnage mode, armor and infinite ammo cheats make you feel like the ultimate bad ass bug killer.