Welcome to our CHEATfactor Game Review of Final Fantasy XV. We review the game and then factor in how the available cheats affect the overall game experience. For better or worse, our reviews will help you decide whether or not to use cheats when playing the game.

Every Final Fantasy game is about conflict, whether it's between nations, two rivals or something else entirely. Final Fantasy XV has all that but it's most interesting conflict is the one brewing inside of it. As the game confidently let's you know right when you start, Final Fantasy XV is game meant for both long time fans and new players alike and it's a conflict that while it makes a valiant effort, never really comes to terms with finding a happy medium. Final Fantasy XV is a game that's full of a lot of moving pieces and the vast majority of them are entertaining as hell, but they rarely ever come together to form the cohesive package that they should, that fans have been waiting years for. You'll still have a lot of fun hunting monsters thanks to the stellar combat but Final Fantasy XV is a game whose individual parts are better than the entire package.

...you're on a road trip with your buddies. 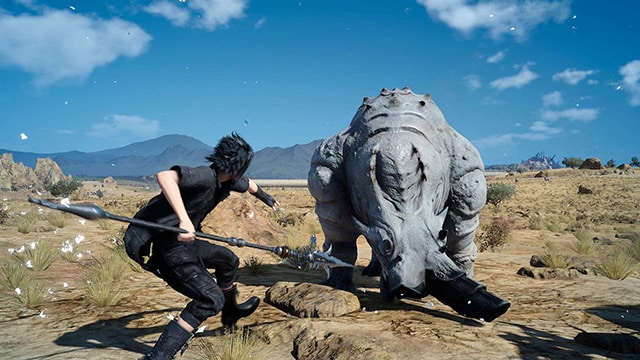 The differences between Final Fantasy XV and previous games is pretty clear right from the start as you're not playing as a fighter concerned with fighting evil or the old RPG staple of a young boy who goes on a journey that makes him much bigger than he'll ever know. No, in Final Fantasy XV you're on a road trip with your buddies. You're still a Prince and there's an underlying story of an arranged marriage and the success and safety of the kingdom but the story of Prince Noctis and his three childhood friends takes center stage here. That's a good thing though since much like previous games, the core story of Final Fantasy XV can be quite hard to follow, even more so if you haven't done your homework. There's a recent movie release called Final Fantasy XV: Kingsglaive that is pretty much required to know what's going on. More often than not, it just kind of happens in the background but the times it takes center stage you'll likely be very confused unless you've done the proper research.

The true heart of Final Fantasy XV lies in the relationship between Prince Noctis and his three buddies. The world of Eos is wide open and gorgeous and you're mostly free to explore it at will. The game does feature fast travel but this may be the only time you'll hear me recommend that you use it as infrequently as possible. Yes, it gets you through the game faste but you're going to miss out on some great moments. While sometimes cheesy, the banter that happens between the four friends is fun and offers tons of insight into the characters. You're also free to hop out of the car at anytime, whether you're going on a monster hunt, just seeing the sights or visiting local landmarks there's always plenty to do. You can stop at rest stops, and gas stations and talk to the locals for tips for your next adventure, which in never too far away thanks to a plethora of side quests and missions.

My favorite thing to do in Final Fantasy XV though is easily the game's monster hunts. Taking a page from The Witcher 3, Eos is full of giant beasts, and someone has to take the down. While the game doesn't do the actual hunt for these beasts quite as well as The Witcher 3, the battles are clear standout moments. You'll have to rely on every trick the game teaches you and some that you'll find yourself to be successful. I love giant enemies and Final Fantasy XV supplies them in spades

That plethora of content though also works against Final Fantasy XV though in certain situations. Not only is there a lot you can do in Final Fantasy XV, but there's also a lot that you have to do. Much like previous Final Fantasy games you're going to be spending a lot of time in menus and divying out skill points to level up characters but here you'll also have to rest and eat, which also includes researching new recipes for your party to make, each that have different buffs for your party. It's all very manageable but Final Fantasy XV never knows if it wants to give you complete freedom or just the illusion of it. It's a lot of fun to explore Eos and everything that makes it unique but the game frequently puts limitations on that thanks to what often feels like busy work. Then there's the last third of the game which for some reason completely ditches the open world that works so well in favor of cramped corridors and linear gameplay. To be fair, you can go back to the open road at any time but to keep the story going it's a necessity.

...what would a Final Fantasy game be without magic? 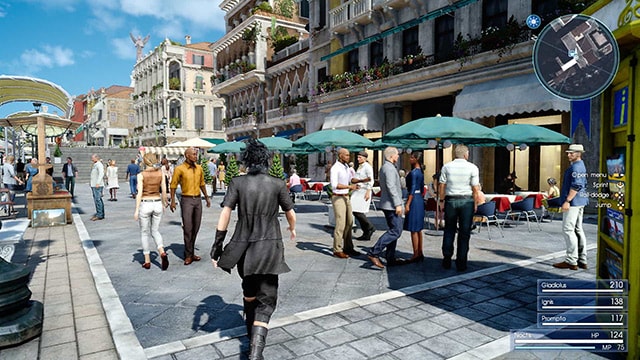 It's a good thing then that the combat system in Final Fantasy XV is mostly stellar. While you can switch to a more traditional slowed down system at nearly any time, Final Fantasy XV mostly ditches the turn based style of gameplay from previous games in favor of  Kingdom Hearts-esque real time combat. Noctis has four weapon slots that can be equipped with whatever you're able to find throughout the world and switched between at any time and different enemies are more susceptible to different weapon types so experimentation is key. You don't have direct control over Noctis' buddies but they're more than capable of taking care of themselves in battle and you can call on them to do some pretty awesome team up moves that deal a hefty amount of damage. They'll also stop you sometimes when you try to run head first into battle and suggest other ways you may be able to get a leg up on your opponents, but it usually just revolves around using your teleport ability to get behind enemies.

Of course, what would a Final Fantasy game be without magic? While it's here in XV, it does feel limited.  Spells are limited to one of three elemental types; fire, ice and thunder and are on a pretty restrive cooldown timer thanks to the hefty amount of damage they can do. You can change up a few things with spells like having them heal a party member rather than do damage but it still feels incredibly limited when compared to previous games. Summons are back in Final Fantasy XV and feel bigger than ever. If you're new to the Final Fantasy franchise, summons allow you to conjure up giant beasts and god like creatures to take out your enemies. They're some of the most fantastic moments in the game but I still don't know exactly how to conjure them up after nearly thirty hours with the game.

By far though, my biggest gripe with Final Fantasy XV is it's finicky camera system. You freely control the camera with the right thumbstick, but that doesn't stop it from doing whatever it wants at all of the absolutely wrong times. Oh, you're in a fight with a giant beast that wants nothing more than to rip you and your friends to shreds? The best place to focus the camera is obviously on that rock off in the distance. The camera in Final Fantasy XV seems intent on putting the focus on the worst possible thing at all times.  Oh and when you're in a confined space, forget about it because the camera just pretty much gives up and spazzes out all the time.

It's clear that Final Fantasy XV isn't sure what it wants to be and it suffers a bit as a result but there's no denying that all of it's moving parts create a remarkably fun experience. It may not be as cohesive as it could have been but the game clearly succeeds more often than it fails and deserves to be played by new fans and those who have been with the series for years alike.

Overall: 8/10
Presentation:
8
Gameplay:
8
Lasting Appeal:
8
CHEATfactor:
0
CHEATfactor
As of this writing there are no known cheats or trainers available for Final Fantasy XV. Stick with Cheat Happens for more as they become available!