Welcome to our CHEATfactor Game Review of Night in the Woods. We review the game and then factor in how the available cheats affect the overall game experience. For better or worse, our reviews will help you decide whether or not to use cheats when playing the game.

What it is: Part platformer, part social game and a little bit of alot of other things; just what Night in the Woods is, is kind of hard to naildown. Regardless, it’s a unique game with an incredibly interesting art styleand a narrative that flows remarkably well, especially if you can identify withit’s growing up in a small town story. Night in the Woods isn’t for everyone,and I wouldn’t blame you if you downright hate it, but you can’t deny it’sappeal.

...some pretty unique and interesting themes... 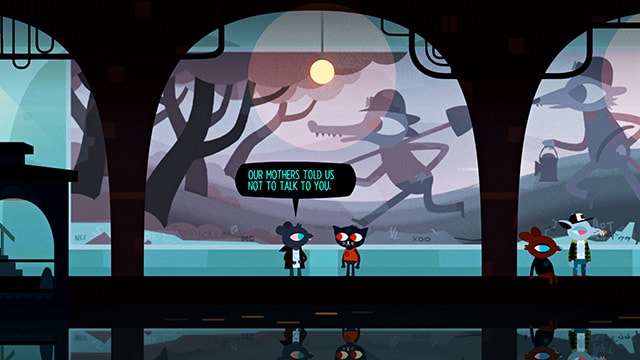 The writing: Night in the Woods tells the tale of Maeve, a young girl (well, she’s technically a cat...thing..) that drops out of college and has to come back to her small hometown. As someone who grew up in a small midwestern town, went away and came back; it hit hard man. The game has some pretty unique and interesting themes, from the changing dynamics of friendships as children vs adults and expectations vs reality. The writing in Night of theWoods is done so well, and even some more risky topics like a same sex couple talking about being the only one in that small town and how they’re treated are handled well. In an era where more and more games ditch their narrative completely, I was glad to see that not only was there such a great one in Night of the Woods, it takes center stage.

It’s definitely different: Technically,the easiest way to describe Night in the Woods would be as a platformer, butthere’s so much more to it. There’s a number of mini games and they’re sure to keep you surprised as you experience them. One of my favorites was the Rock Band like rhythm game that you play through as Maeve reunites with her old bandfor a jam session. There are also knife fights to get into with your friends oddly enough and a city to explore. Not only did Night in the Woods keep me guessing the entire time, but it also kept things interesting. The interactions betweens Maeve and the people in the city of Night in the Woods are done so well it can be easy to forget that there’s a ghost mystery to unravel at the heart of the game.

The art style:  The poppy, story-book art style of Night in the Woods is unique and I haven’t seen it in many other games. The game definitely has a style all it’s own and one of the game’s pivotal moments is currently serving as my laptop’s desktop background. This is one of those games that can looks as great on a lower level machine as it does on a higher one.

...a habit of leaving things a bit more open... 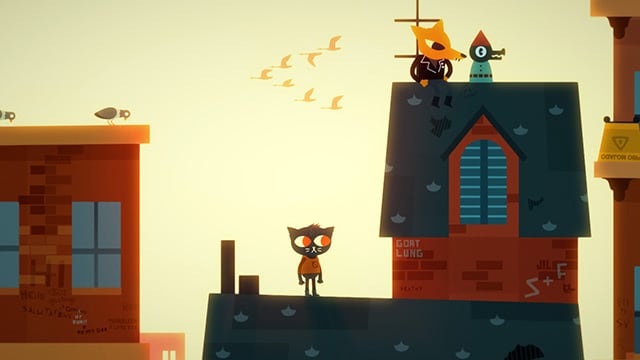 It’s not for everyone:  Fair warning, Night in the Woods isn’t for everyone. It doesn’t have the same focus as a traditional game and some may find the banter to be just plain boring. If you’re looking for a traditional game with a definitive beginning, middle and end you may want to look elsewhere as Night in the Woods has a habit of leaving things a bit more open than some would like.

Conclusion: It’s short and it’s not for everyone but Night in theWoods is easily one of my favorite surprises I’ve played in quite some time. It’s narrative hit home with me and I identified with the plight of Maeve more than I’d even care to admit. If you’re looking for something new to playthrough and don’t mind it being a little bit weird, you should definitely checkout Night in the Woods.

Overall: 8/10
Presentation:
8
Gameplay:
8
Lasting Appeal:
7
CHEATfactor:
3
CHEATfactor
CHEATS USED: Super Jump
The trainer from Cheat Happens for Night in the Woods only features one cheat but it's a damn good one. Using the Super Jump cheat you'll be able to reach higher areas faster, and move through the game and the story faster. The game itself is pretty simple in scope so it's fitting that it gets a similar trainer.

Joe Sinicki
Joe started off writing about video games for small fan sites when he realized he should probably do something with his communications degree and didn't want to get into the grind of daily reporting.Joining the team in late 2008, Joe is the featured game reviewer for Cheat Happens, producing up to 10 CHEATfactor Game Reviews per month.