Welcome to our CHEATfactor Game Review of ASTRONEER. We review the game and then factor in how the available cheats affect the overall game experience. For better or worse, our reviews will help you decide whether or not to use cheats when playing the game.

What it is: A randomly generated space exploration sim where you have to use your resources to survive. Yes, it's a lot like No Man's Sky, at least in theory but Astroneer has some tricks up it's sleeve that separate it from Hello Games' much debated disappointment. 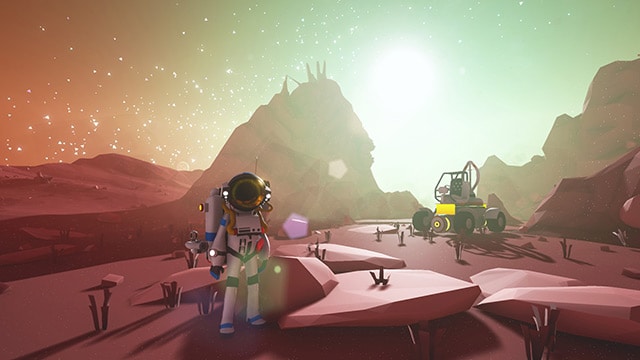 Simple, fun exploration: While No Man's Sky literally promised the universe and failed to deliver, Astroneer's goals are a little more of this world, but it wildly succeeds at them. You start the game by crash landing on a foreign random planet and then it's off to find resources and explore. The rules of Astroneer are simple, stray too far from your ship and you'll start to lose oxygen, so you'll have to find ways to get to where you've got to go and back quickly enough. Don't worry though, the game won't constantly yell at you about all of your vitals...though they are here.

Tera-forming: By far the most fun part of Astroneer is your ability to change and form the world around you. You know how in No Man's Sky planets were just kind of there? You were a tourist who visited and then went back to orbit? Not so in Astroneer as you can use your tools to change the world around you. Dealing with a wicked sand storm that keeps wrecking havoc on your supplies? Form giant walls around you to block the storms. Looking for a quicker route to that stash of materials you found? Build tunnels that can connect your right to it.  This allows players to think creatively in their exploration, and it's a lot of fun to get lost in.

Multiplayer:  Oh man, the multiplayer. If you had dreams about exploring the world of No Man's Sky with your friends and were let down like the rest of us, you'll want to play Astroneer with some friends. You can play with up to four people and it's amazing what you can build with a group of like-minded people. Entire working space stations, little villages, the amount of creativity is nearly limitless. Fair warning though, when playing for this review, the game did have serious performance issues when playing with other people that I didn't see when playing single-player.

Visuals:  A lot of games these days go for the simple, minimalist style and Astroneer is no different but it does it well enough that we don't mind. Astroneer uses a very simple color scheme and it works well here.

...the game will be better off for it. 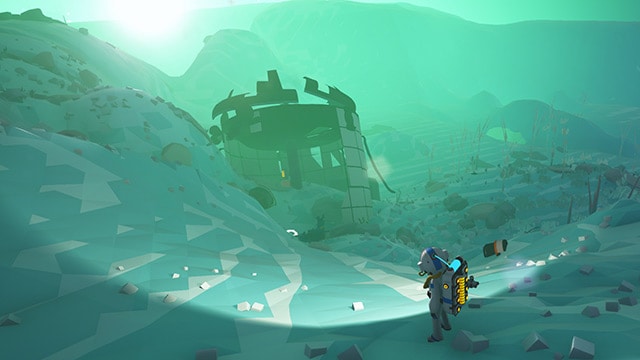 Early Access Issues:  Astroneer is currently available as part of Steam's Early Access program and you can tell from time to time. There's no guarantee that you'll encounter any of these issues but while playing for this review I encountered a good number of bugs, some that sent the game crashing to my desktop. There was also a number of times when the game slowed down, nearly to a crawl when the action got hectic.

Nothing really happens:  If No Man's Sky did anything right, it was the things and sights there were to see on the game's planets, and that's unfortunately something that Astroneer is missing. There's no alien life forms to interact with or creatures to name, there's not really much of a story here in general. These things are possibly being added in future updates according to the developers and the game will be better off for it.

Conclusion: Astroneer is a strange beast, but it's one that I highly recommend. It's quite possibly to lose yourself in it's world, especially if you're playing with other people. While I would have loved to have more content like a story or other life forms, there's a good possibility those things are getting added in a future update. If you're still looking to explore the galaxy, Astroneer may be the game you were really waiting for all this time.

Overall: 8/10
Presentation:
7
Gameplay:
7
Lasting Appeal:
8
CHEATfactor:
8
CHEATfactor
CHEATS USED: Unlimited Power, Unlimited Oxygen, Easy Crafting, more
The trainer for Astroneer gives you the freedom to explore the world around you more freely, with cheats for unlimited battery and oxygen but why stop there? Use the cheat for easy crafting to help build the structures you'll need to make your planet more habitable. There aren't really a lot of features in this trainer, but what's here is great fun.