INTERESTED IN WAGERING ON E-SPORTS? BETUS IS OFFERING A A RISK-FREE BET FOR NEW PLAYERS!
We have 27,277 trainers for 6,743 Games. Get them all with Cheat Happens Premium!
LOGIN | SIGNUP

Welcome to our CHEATfactor Game Review of Tom Clancy's Ghost Recon: Wildlands. We review the game and then factor in how the available cheats affect the overall game experience. For better or worse, our reviews will help you decide whether or not to use cheats when playing the game.

What it is:  The latest in the long running Tom Clancy series; at least in theory. Wildlands isn’t the tactical strategy focused game like those that came before it, it’s an open world action game that attempts to blend the two genres together. The results are a mixed bag but there’s no denying that when the game fires on all cylinders, it’s a lot of fun. Just a word of advice, find some friends before playing. 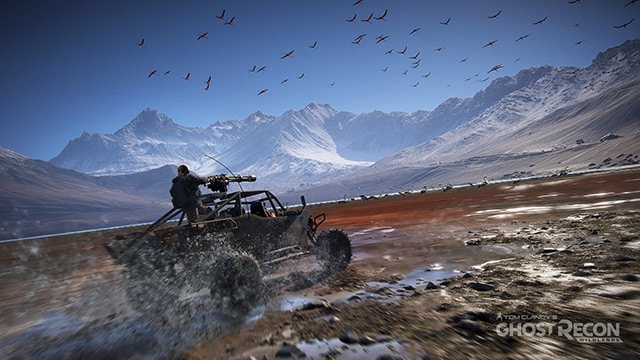 The Map is huge: In Wildlands you play as a solider that you customize to your exact specifications but the true star of the game is easily the gigantic digital version of Bolivia that serves as the game’s setting. Now I know, I’ve told you that a lot of open world games have huge maps but Wildlands is something special. Featuring a number of different provinces and settings including desserts, towns and mountains, it’s almost intimidating. There were a number of times when I first started playing the game that I stood somewhere just in complete awe of everything I could do and everywhere I could go. Perhaps more importantly, there are a ton of things to do on the map. Your main goal is to take out members of the cartel on the way to the boss El Sueno but there are tons of side missions to go on in the meantime.

I love it when a plan comes together: The big draw of Wildlands is that you can achieve your goals in literally anyway possible. Sure, you could sneak into the enemy base and take out the targets just strategically like in previous Ghost Recon games and it’s damn satisfying to do so but you can also go in Rambo style and just shoot the place up. Where’s the style in that though? Wildlands is truly at it’s best when you’re playing with other real people and you can get as devilishly creative as you want. Want one squad mate to create a diversion? Have him fly a chopper right into the base while the others go around taking out enemies. Want to catch the targets by surprise? Skydive right into their base and rain death from above. The game is filled with possibilities, and it’s a ton of fun to pull of a great plan.

But even more when it doesn’t:  Buuuuut, I can honestly say I had a lot more fun when those plans didn’t work. I always went into missions with the best of intentions but sometimes they don’t just work out but Wildlands is still a whole lot of fun, perhaps even more so.  When those plans don’t turn out, Wildlands turns into an action movie on steroids. I’m chasing down a convoy of drug running supplies in a helicopter as it speeds down a country road; I’m dodging mortar fire set out by my squadmates simply because they thought it’d be funny. Ghost Recon Wildlands merely gives you the tools and supplies to create your own chaotic masterpiece. Happy trees not included.

There’s a lot to customize: The first thing you’ll do in Ghost Recon: Wildlands is create your character and there’s a surprising amount of depth here. You can also create a number of different outfits and looks for different situations and you can swap between them pretty freely. I found myself changing pretty freely between my sniper outfit and my standard depending on what the mission called for. Did the different outfits have any effect on my stats for the game? That’s debatable, but it just felt better. What did have an effect though was the gunsmith mode which let me craft different guns to experiment with.

...a lot of fun playing with other real people...

It’s a far better co-op experience than single player: While Ghost Recon is a lot of fun playing with other real people, it’s a lot less when you’re playing on your own.  You’ll get three AI controlled squadmates who can at least manage to stay not dead for long enough for you to complete a mission and you can order them around to do basic things like go to a position, hold their position or open fire but the game unquestionably loses its sense of unpredictability.

It’s very, very repetitive:  That all combined with the fact that Wildlands is a very repetitive game in general. The story does a good job at attempting to give you reasons to do what you’re doing but each mission boils down to go here, shoot this, blow up that, kill person a...rinse and repeat. It’s all fun, but there’s no doubt that it gets old very quickly.

Conclusion: Ghost Recon: Wildlands seems to be unsure as to what it wants to be and as a result, it suffers a bit. Nevertheless, Wildlands is a fun, if not predictable and repetitive open world shooter that’s best played with friends.

Overall: 7/10
Presentation:
8
Gameplay:
7
Lasting Appeal:
7
CHEATfactor:
8
CHEATfactor
CHEATS USED: Set Skill Points, God Mode, Super Stealth Mode, more
Ghost Recon: Wildlands’ biggest trick is letting you do whatever you want and giving you complete freedom to accomplish your goals in any way you want, but why stop there? Using the trainer from Cheat Happens allows you to be even more creative because you no longer have to worry about the consequences. Add skill points, max out your health, armor and weapons, it’s all here. With the trainer from Cheat Happens, the Cartel will fear you and your ghosts.