We have 23,545 trainers for 6,137 Games. Get them all with Cheat Happens Premium!
LOGIN | SIGNUP
Call Of Duty: Infinite Warfare Review
CHEATfactor Game Review by: Joe Sinicki
Reviewed on: PC

Welcome to our CHEATfactor Game Review of Call of Duty: Infinite Warfare. We review the game and then factor in how the available cheats affect the overall game experience. For better or worse, our reviews will help you decide whether or not to use cheats when playing the game.

If Call of Duty: Infinite Warfare was known by any other name, it could very well be one of your favorite games of the year. It’s a more than competent shooter that’s full of bravado, scale and the bombastic moments that the series is known for. There’s no way around it though, this is Call of Duty in space but it’s the moments where the game deviates from the franchise norms that makes it a must play but the more mundane bits fail to stand out from what’s come before. After a virtual crapstorm of hate on sites like Twitter and Youtube, Infinite Warfare is exactly what it should have been all along but at the same time; it could have been so much more.

...bigger in scope than you may even expect. 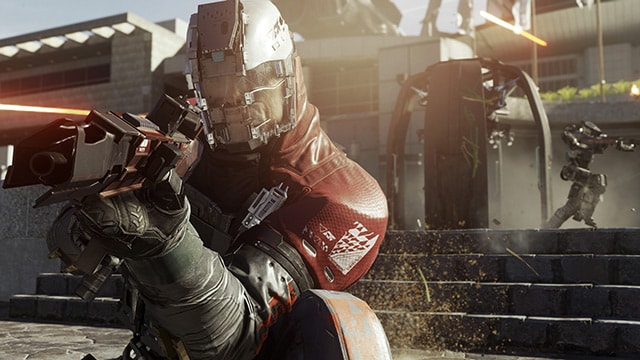 Infinite Warfare tells the story of the conflict between the United Nations Space Alliance  (UNSA) and the terrorist like Settlement Defense Front (The SDF). The plot itself if pretty mundane, The SDF are your pretty straight forward bad guys and are doing bad guy things and you have to stop them. It revolves around the competition for the last remaining resources available in deep space. You’re Captain Reyes, a high ranking soldier who assumes his role after the current captain is killed in duty during an attack by the SDF. It’s up to Reyes to regroup the troops and stop the SDF. While the story itself isn’t all that inspired, the campaign is surprisingly well put together thanks to fantastic visuals, well written and delivered dialauge and well fleshed out characters. Above all else, Infinite Warfare’s surprisingly good campaign serves it’s purpose and acts as a vehicle to get you through the set piece moments, which are bigger in scope than you may even expect.

And let’s be clear, no one does scale as well as the Call of Duty franchise. Infinite Warfare’s campaign is a non-stop ride from one giant moment to the next. Whether you’re defending a town from an attacking SDF or storming a base on the moon, Infinite Warfare is intent on gripping you and never letting go. It’s a summer blockbuster type game that’s so much fun to play through the first time as you’re just trying to figure out how much they’ll throw at you, and the answer is a lot. There really isn’t much downtime in the game as once you finish one thing it quickly shuffles you to the next and it’s usually on a much bigger scale than what you just did. The missions may not be as open as those in a game like Battlefield 1, but in terms of theatrical scale and scope, Infinite Warfare can’t be beat.

There’s no way around it, Infinite Warfare is Call of Duty in space and it’s surprisingly the moments that stick to the series norms that are the game’s weakest. Despite those fantastic set pieces, most of the missions revolve around you doing Call of Duty type things, moving from area to area, clearing out enemies, moving forward and repeating. There’s nothing inherently bad about the shooting mechanics in Infinite Warfare, they just haven’t evolved much in each of the annual releases and it suffers as a result. There are cool new toys to play with and while some of them so feel uniquely fun like the anti gravity bombs and seeker grenades which turn into enemy seeking robots but even the game’s newest and biggest guns feel like retreads of what came before in previous games. It sounds weird to say but too much of Infinite Warfare is spent doing Call of Duty things in Call of Duty places for Call of Duty reasons. That’s not to say though that Infinite Warfare plays it safe throughout the experience as there are some stunningly surprising moments throughout the game and key among them is the addition of spaceship combat to the established formula. I knew the game would feature it since it was so prominent in the game’s marketing but what I did not expect was for it to be so well done or just how much of it was in the game. After one of the game’s first missions you’re quickly brought into space and put in the middle of a giant dog fight between UNSA and SDF forces and it’s tons of fun. The controls are easy to handle and it’s very rewarding to take out enemies and blaze around space. It’s Wing Commander, it’s Star Wars, it’s a surprising place to find what a game like No Man’s Sky should have been. It’s moments like these that make Infinite Warfare stand out, not just from previous games in the series but from this year’s plethora of first person shooters.

The rest of the Infinite Warfare package is rounded out by the series trademark multiplayer, zombies and in certain editions of the game, a near complete remake of Call of Duty 4: Modern Warfare. Each of these modes are pretty much what you’d expect from the franchise and do add to the value but don’t add much to the overall package. They’re a lot of fun to play through with friends, especially the zombie mode but it’s nothing you haven’t played before.

Call of Duty: Infinite Warfare isn’t as bad as the internet would make it seem, not anywhere near as bad. At the least, it’s a competant shooter that sticks to familiar genre and franchise tropes for much of the experience but at it’s best it’s a competent shooter with breakneck pacing that is at it’s best when it doesn’t stick to those tropes. Infinite Warfare may not change your oppinion on the Call of Duty franchise, but it is one of the best installments in quite some time.

Overall: 7/10
Presentation:
8
Gameplay:
7
Lasting Appeal:
6
CHEATfactor:
8
CHEATfactor
CHEATS USED: Unlimited Items/Gadgets, Unlimited Health, Slow Motion, more
One of the coolest things about Infinite Warfare is the cool weapons and tech that you get to play with. The trainer from Cheat Happens gives you more access to these features and gives you access to them faster and longer. It also features the standard shooter cheats that you see in a lot of trainers like unlimited health and ammo. The trainer for Infinite Warfare is sort of like the game itself, a bit you’d expect and a bit you wouldn’t.