Welcome to our CHEATfactor Game Review of Pac-Man Championship Edition 2. We review the game and then factor in how the available cheats affect the overall game experience. For better or worse, our reviews will help you decide whether or not to use cheats when playing the game. 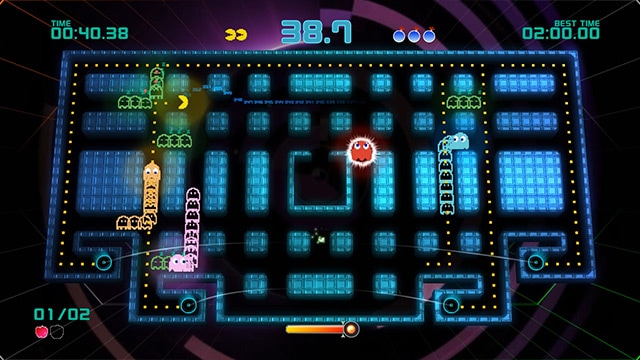 If you’re not familiar with the championship series, it can best be described as Pac-Man on performance enhancing drugs. You still move through the maze, munching on dots and avoid ghosts but things move a lot faster here. The biggest change however is Mr. Pac’s relationship with his costars the ghosts. Changing up tradition it’s no longer immediately lethal to run into a ghost but don’t be fooled, it’s still not the greatest idea. Pac-Man can now bump into a ghost twice with nothing happening but the third time the ghost becomes enraged and tries to actively hunt down Pac-Man. Purists may scoff at the idea of changing up such an established formula but there’s a remarkable amount of challenge in Championship Edition 2 and the game moves so fast that you’re bound to run into a ghost or two and you’ll start using it as part of your strategy.

The game is also aided by some truly fantastic level design that will make you change the way you look at a traditional Pac-Man board. The game honors the tradition of the franchise but each board has slight differences that effect gameplay. One board for instance is very small and features slim corridors that are harder to evade ghosts in, while another has looping sections on the map with require near perfect timing. There are other tricks too like jumps that send you off to other parts of the map instantly and fruit that evades you much like ghosts. Dots are laid out throughout the board in a pattern rather than throughout the whole thing so you’ll have to have a plan as to how you’ll best get through the board. Eating enough dots unlocks the fruit, which allows you to move on to a new board. Eventually you can unlock a power pellet which lets you eat the trail of ghosts you’ve woken up and let me tell you, there’s nothing as satisfying as chomping on a whole line of ghosts and racking up points.  It’s a feeling like no other in gaming. 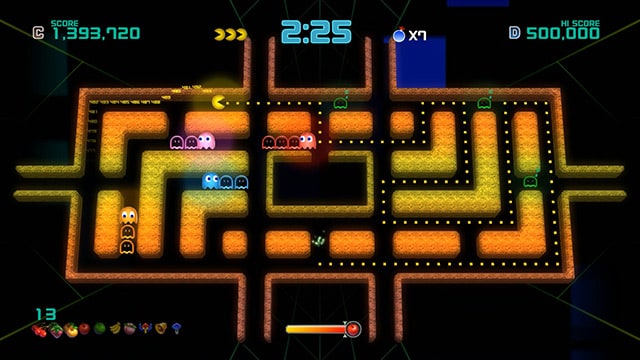 The game is broken up into two modes, score attack and adventure mode. Score attack is the definite star of the show and in classic Pac-Man fashion, has you trying to rack up the highest score within a five minute period. You gain a letter ranking on each level and difficulty and don’t progress until you’ve reached a certain point and it’s incredibly possible to get lost in all of the lights and sounds, getting in a zone of sorts. The harder difficulties are faster and featuring multiple trains of ghosts to avoid and eventually chomp down on. Adventure Mode is much more objective driven, asking you to eat a certain number of fruit or ghosts in a certain amount of time, eventually leading up to a boss stage, which is usually a giant ghost that turns that difficulty up very quickly.

In an industry flooded by remasters and re-releases, Pac-Man Championship Edition 2 proves that there is room for innovation even with some of the most established formulas. It takes the framework set by a property that’s over thirty years old and manages to make it feel completely new but still honors it’s past. I can’t recommend Pac-Man Championship Edition 2 enough.

Overall: 8/10
Presentation:
8
Gameplay:
8
Lasting Appeal:
8
CHEATfactor:
0
CHEATfactor
As of this writing there are no known cheats for Pac-Man Championship Edition 2. Stick with Cheat Happens for the latest!