Welcome to our CHEATfactor Game Review of Nier: Automata. We review the game and then factor in how the available cheats affect the overall game experience. For better or worse, our reviews will help you decide whether or not to use cheats when playing the game.

What it is:  Unlike with most reviews that's not an easy question to answer. It's not quite a brawler, a shooter or an open world action game but it's got elements of each. It's a complex stew of game mechanics and ideas that really shouldn't work but somehow come together to create so unique and tasty that it really can't be ignored. There's no debating that Platinum Games' latest is a strange beast, but it's also that strangeness that makes it so a fun and unique experience. 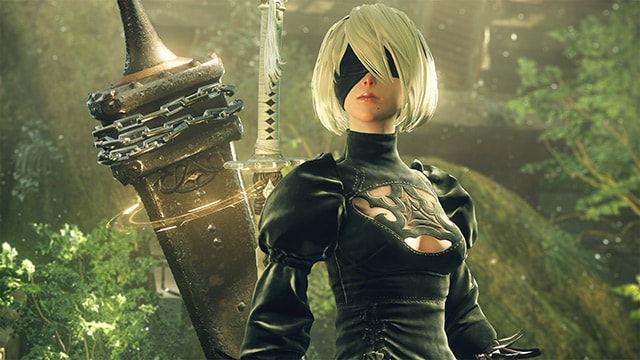 It's like nothing you've ever played: A lot of games try to tell you that they are unique experiences but Nier: Automata does more than just talk. It starts in an unusual place, as a 2D air combat shooter. Then, before you know it, you're hacking and slashing..then the camera shifts slightly and you're in a sort of weird twin-stick shooter. Nier: Automata successfully does what many games only try to do, mix gameplay elements to create a unique experience. Throughout the lengthy campaign I was kept guessing and thus invested in the world around me. Amazingly, that doesn't end when you beat the game; you can go back through and get a completely different view on the game's events and even play as a completely different character.

Fantastic Combat: If I had to compare Nier: Automata to any game, it would unquestionably be the Bayonetta series. The game's combat is taken almost directly from the series but given unique touches to feel like something unique. You alternate between basic and heavy attacks but also have a pod that can shoot at your enemies as well and you can use both mechanics at the same time, allowing for some pretty cool moments.  Enemies in Nier: Automata come at you quickly and in droves and it's incredibly satisfying to slice your way through them. The game consistently throws you into new situations and you have to think quickly to figure out how to best deal with them.  This is even more true with the game's boss characters, and I've spoken openly about how I'm a sucker for giant enemies but Nier does this exceptionally well. Most of the enemies aren't to the scale of some of the fantastic boss fights in Bayonetta 2 but they're still awesome.

This is unquestionably developer Platinum Games playing to their strengths, which they didn't for more than a few titles; I'm looking in your direction Teenage Mutant Ninja Turtles: Mutants in Manhattan...

The customization system:  Throughout your time with the game, Nier Automata keeps introducing new mechanics and ideas even up until the game's ending but my favorite has to be the customization mechanic that really changes the way you'll play the game Throughout the campaign you'll pick up memory chips that change everything from how you fight to the clothes you wear. You can only  equip certain chips at certain times and there's a limit in how many you can equip at once but it's all part of what makes Nier: Automata so much fun to experiment with. There are so many little changes and systems here that I can almost assure you that your playthrough won't be exactly like mine.

...feels like an idea that's not fully fleshed out. 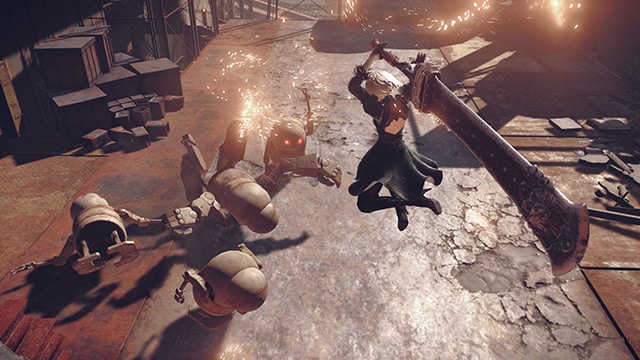 It lacks as an open world game:   Not all of Neir's ideas work as well as everything else does though.  The game doesn't seem to be ready to commit to whether it wants to be a linear game or open world and the result feels like an idea that's not fully fleshed out. I highly much prefered the structured sections because it gave the game the chance to truly present a fluid experience and thus I appreciated the little things the game does all that much more.

Overall: 9/10
Presentation:
8
Gameplay:
9
Lasting Appeal:
8
CHEATfactor:
8
CHEATfactor
CHEATS USED: One Hit Kills, Super Speed, Unlimited Skill Storage, more
Throughout your time with Nier: Automata you’ll find memory chips that will upgrade your abilities and skills, but the real advantage here is with the Trainer from Cheat Happens. Featuring a ton of options like one hit kills, super speed and jump and my favorite; unlimited skill storage, there’s no better way to experience Nier: Automata than with the trainer from Cheat Happens.