Welcome to our CHEATfactor Game Review of Styx: Shards of Darkness. We review the game and then factor in how the available cheats affect the overall game experience. For better or worse, our reviews will help you decide whether or not to use cheats when playing the game.

What it is:  The sequel to the better than it had any right to be stealth game from a few years ago. Shards of Darkness takes the if it isn't broke, don't fix it approach, which is okay enough as the game works, it just doesn't really do anything that you can't get in any other stealth game.  Technically sound enough with moments that flirt with genius, Shards of Darkness is held back by lackluster AI, gameplay that doesn't take advantage of some pretty stellar level design and a sense of humor that's sure to fall flat with a vast majority of those who play it.

...move from spot to spot with ease. 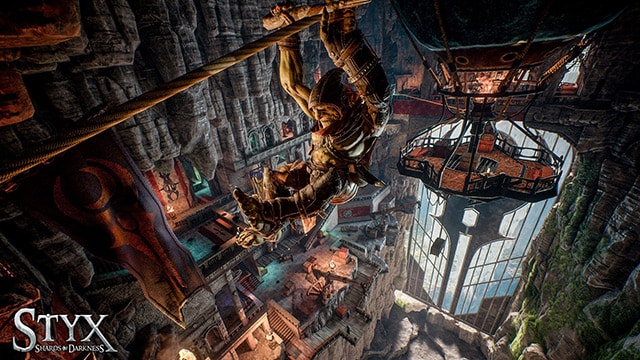 Mechanically, it's very solid: If there's one thing you can say about Shards of Darkness, it's that it's mechanically sound. While that may not sound like a huge deal, think of the last stealth game you played. Think of the timing, think of the precise placement needed to be successful, now think about what would happen if that game wasn't as tight as could be. Controls in Styx are fluid, responsive and deliver when they're needed. You're able to sneak around with ease and a smart cover system allows you to move from spot to spot with ease.

Great level design tailor made for stealth: A great stealth game relies on great level design and Shards of Darkness delivers in spades. Each level features multiple stories and allows you to complete your objective in multiple ways. There's a gigantic sense of scale here that you don't see in many games, and it's easily on the level of a game like Dishonored and it's sequel. Credit also must be given to the development team for making these levels so different. While you're sure to see a number of dungeons and corridors, the game isn't afraid to let you loose in a town.

Styx's abilities are also tailor made for a stealth game like this. While they're all genre standbys that we've seen before, they do offer a unique take on those tried and true mechanics. For instance you can puke out a decoy of yourself to fool guards. It's something that really wouldn't work in any other game but fits so well here. That same goblin charm can hurt Styx too as later in the game enemies can smell you even if you're hiding.

...doesn't really do much in the way of new. 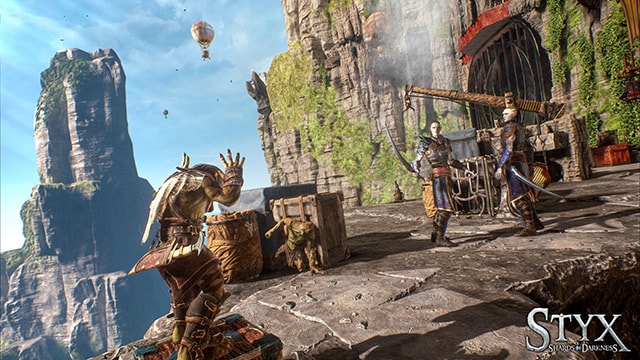 There's not much new here:  Early on in my play through, I realized that I'd played Shards of Darkness before. Even though I've never touched it before,  Shards of Darkness falls in line with the majority of stealth games released in recent years. Styx may not be mechanically sound but it doesn't really do much in the way of new. Everything it does has been done in a million stealth games before and those games usually did it better.  With it's use of magic and weapons Shards of Darkness is most similar to the most recent Thief game (don't worry, it's much better than Thief) but there are also obvious influences of games like Metal Gear, Splinter Cell and Assassin's Creed.

Trial and error gameplay: Styx is not a fighter and that makes the game significantly more challenging but it also takes you out of the experience. You're able to strike from the shadows and kill guards with your dagger and other weapons but get caught and you're going to have to restart pretty quickly, and that's part of the problem. You're going to fail in Styx and you're going to fail a lot. The game doesn't do offer much in terms of improvisation once you're found and you're essentially just restarting until you find something that works.

The humor falls flat: Shards of Darkness employs the type of humor that's so hot right now, in your face and self aware. Styx breaks the fourth wall a lot and cracks some crude jokes at the player's expense and it's pretty obvious that the developers are fans of Deadpool but with how much you're going to fail, and thus how much you're going to hear the jokes they fall flat, and they do so quickly.

Conclusion: Styx: Shard's of Darkness is a competent but uninspired stealth game. It doesn't really do anything that other stealth games for half it's price but that doesn't stop the fact that it's fun, even if just for a little bit.

Overall: 6/10
Presentation:
8
Gameplay:
6
Lasting Appeal:
6
CHEATfactor:
7
CHEATfactor
CHEATS USED: Stealth Mode, Disable AI, Unlimited Items, more
The trainer for Styx: Shard's of Darkness offers a ton of great features like the ability to easily sneak by undetected with the stealth mode cheat or take out guards with ease, or at least escape enemies with ease. All else fails you can just use the eliminate AI cheat to make Styx the ultimate goblin warrior.