Welcome to our CHEATfactor Game Review of Death Road to Canada. We review the game and then factor in how the available cheats affect the overall game experience. For better or worse, our reviews will help you decide whether or not to use cheats when playing the game.

Playing through Death Road to Canada from RocketCat Games, I couldn’t help but remember the days when I would sneak the more violent Super Nintendo and Sega Genesis games into my house past my parents. There was a mom and pop video rental store on the corner of my block and I was in there every day and eventually they just got to the point where they would rent me anything I wanted…short of the movies behind those doors. Death Road to Canada feels like one of those games that I would sneak in and giggle as I played with the sound down. It’s unique but more importantly it’s a lot of fun.

...they all make a distinct difference in gameplay. 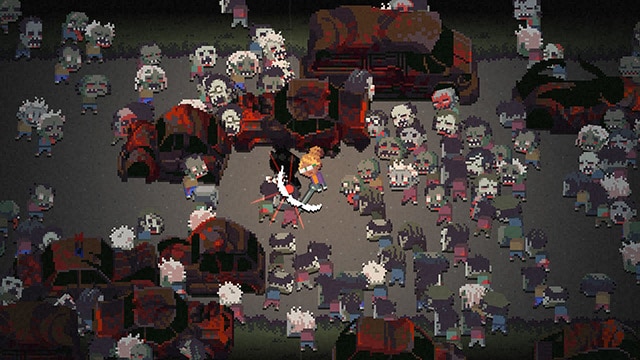 The game plays like a cross between a text based adventure, Oregon Trail and Super Nintendo classic Zombies Ate My Neighbors. You and a friend are in zombie infested Florida and you hear a rumor that the great white North of Canada is the last remaining land that hasn’t fallen victim to the zombie outbreak so you set out, across the United States to find safety. You can completely randomize your characters or make them like someone you know through the pretty robust character creation engine. You’ll be able to choose everything from fighting style and characteristics to the look of your character and what’s perhaps more important, they all make a distinct difference in gameplay.

Death Road to Canada is a sixteen bit inspired randomly generated survival game, so it seemingly checks off a lot of the boxes in the “this again?” category, but there’s a lot more here than it initially leads you to believe. You’re going to be making choices based on where to explore and where to avoid based on a series of very well written text blocks that explain the situation you’re in the middle of. Funny and incredibly self aware, Death Road to Canada understands what type of game it is and pokes fun not only at itself but at the world around it. What I liked though is that the cynical sense of humor never got in the way of what's most important, the actual gameplay. Remember the old adage that getting there is half the fun? This game definitely believes that and it has a lot of fun putting you in situations and introducing you to characters that make each play through a truly unique experience.

For instance on one play through I picked up a drifter who ended up becoming one of the best leaders of any I found in the game. He was charismatic and was able to convince a group of bandits to not only spare us but join our trip. Then there was one time where my characters picked up a stray dog but after an encounter in a city, the stray dog was the only one left alive, he picked up a shotgun and fought off just enough zombies to make it to the closest vehicle, the Oscar Meyer Weiner Mobile and drive off. It’s moments like these that make this game so unique and so much fun to just sit back and chuckle at. Fair note, if you take your zombie games too serious, this is not the game for you but i loved the off kilter sense of humor. 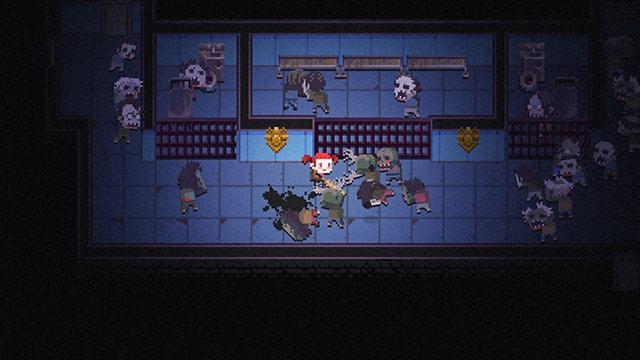 You’re going to die in Death Road to Canada and you’re going to die a lot. Any one wrong move can prove to be a mistake and send your survivors into the hordes of the moaning dead. For what it’s worth, I actually loved how just getting touched by a zombie didn’t hurt my characters and one they were grabbed they had a chance to actually escape before taking damage. Combat in Death Road to Canada is pretty simple, you switch weapons with one button and swing with another but there’s some pretty impressive weight to the weapons you’re going to be swinging and it’s all the more rewarding when you connect. There are also an impressive number of weapons to collect from sports equipment to metal and pipes.

Death Road to Canada took me back to a place I didn’t expect and I had a lot of fun because of it. The game’s brand of offbeat humor and action harkens back to the much more simple time of the Super Nintendo action games that I loved so much and as a result Death Road to Canada became one of my favorite games of the year.

Overall: 8/10
Presentation:
7
Gameplay:
7
Lasting Appeal:
9
CHEATfactor:
7
CHEATfactor
CHEATS USED: Infinite Health, Add Loot
While the trainer from Cheat Happens for Death Road to Canada doesn't feature a lot of features, what it does feature will oddly enough both give you new options and limit your experience. Using the cheats to have infinite health and loot you'll be an unstoppable zombie killing, road tripping badass but it also manages to take away some of the game's coolest moments. You see, Death Road to Canada is built on the strength of those little unpredictable moments where you'll have to improvise when things go south and your character dies and with infinite health you kind of lose that.