Welcome to our CHEATfactor Game Review of Halo Wars 2. We review the game and then factor in how the available cheats affect the overall game experience. For better or worse, our reviews will help you decide whether or not to use cheats when playing the game.

What it is: The sequel to the 2009 real time strategy game set in the Halo Universe; also known as the sequel no one really asked for. It's not that Halo Wars 2 is a bad game, far from it in fact, it's just that unless you're in the game's core console based audience, with very little in terms of RTS games, it feels remarkably dated. It does the basics very well, but the PC is overcrowded with games of the genre and Halo Wars 2 doesn't do much to stand out from the pack. That being said, it does do what it sets out to do and creates an RTS that's fun and more importantly playable on a gamepad should you want to for some reason.

...fits in with the established lore... 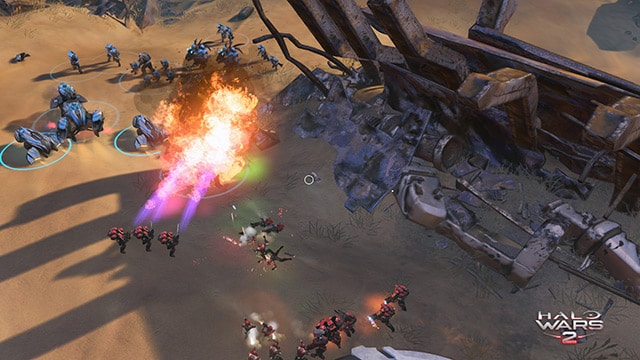 It's faithful to the Halo world: The main audience for Halo Wars 2 is clearly those that eat up the Halo franchise, and that's an awful lot of people. In truth, the story of Halo Wars 2, which centers around the cryogenically frozen crew of long last ship being awoken and thrust back into battle is a decent one and fits in with the established lore of the Halo universe. It hits all of the right notes; big ooh-rah speeches, gigantic battles and awesome weapons. It's predictable and the ending feels like a commercial for either the next game or the next DLC but it serves it's purpose.

The Gamepad controls aren't as terrible as they could be: Real Time Strategy games have long been a PC specialty and for good reason, no one has been able to accurately crunch down the complicated controls to a console gamepad. Halo Wars 2 isn't completely successful at this, but they do make a valiant effort at it. The game uses each button on the Xbox One gamepad for multiple functions. Hitting the right bumper for instance will bring up a wheel of options that would normally be their own separate buttons with a traditional mouse and keyboard setup. It's a serviceable enough control scheme and it's by far one of the best console RTS control schemes we've seen but it's still no match for the playing on PC, but luckily the game is part of Microsoft's play anywhere line which lets you buy the game on one platform and play on both.

Blitz Mode:  While much of the Halo Wars 2 seems to be inspired by what came before it, Blitz Mode is easily the game's standout feature. The mode combines traditional RTS mechanics with a deck building card game. You unlock features like bases, troops and weaponry with decks you build and it's a fun new way to play the genre. I couldn't help but feel like the mode relied too heavily on luck, and microtransactions to get more cards but it's still fun to play around with.

...seems like it has no real ideas of it's own. 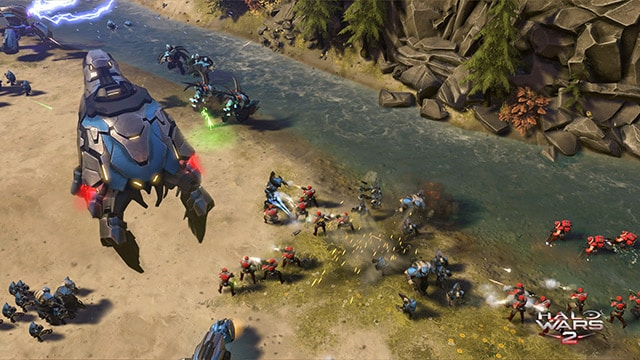 It feels really dated: Halo Wars 2 is a serviceable RTS game. It plays all of the right notes and plays them well, but it just seems like it has no real ideas of it's own. The vast majority of the game feels like an RTS that would have come out a few years ago. Unless you're a dedicated RTS fan who also really happens to love the Halo franchise, there's no reason to play Halo Wars 2 on PC, especially when there are so many other options available for much cheaper. I may seem like I'm bashing the game, and I don't mean for that to be the case, it's fun enough but my Steam library is full of RTS games that do everything that Halo Wars 2 does, but better.

The AI can be infuriating: Picture this, you're in the middle of a giant battle, enemy troops are pouring down on you and you're losing precious resources quickly. Just then, there's a gigantic spider tank that bears down on you to finish the job but none of your troops even begin to focus their fire on it; in fact they don't even seem to notice it. This is a much easier switch when you're playing with a mouse and keyboard but it's tough to refocus your troops when using a gamepad. This is just another instance where Halo Wars 2 feels miles behind many of the other similar games currently available.

Conclusion: Halo Wars is at best, a serviceable RTS but unfortunately it's also not a very inspired one. It seems to pull all of it's ideas from some sort of Real Time Strategy handbook but one that was published about five years ago. While the genre has grown and standout games are available for much cheaper, Halo Wars 2 seems content to focus on just being ok. I'd recommend the game if it were cheaper as it's entertaining enough, but there are plenty of games that do more and try more for less right now.

Overall: 7/10
Presentation:
7
Gameplay:
7
Lasting Appeal:
7
CHEATfactor:
8
CHEATfactor
CHEATS USED: Add Supplies, Add Upgrade Points, Super Health, more
Much like the game itself, the trainer for Halo Wars 2 seemingly takes it's inspiration from what came before it. The options, while useful are exactly what you'd find in the trainer for any other Real Time Strategy game. Don't get me wrong though, the features here are a lot of fun and give you a lot of freedom to play the game exactly how you wanted and give you access to the game's bigger features and weaponry.