Welcome to our CHEATfactor Game Review of Dead Rising 4. We review the game and then factor in how the available cheats affect the overall game experience. For better or worse, our reviews will help you decide whether or not to use cheats when playing the game.

Dead Rising 4 has lost it's heart. It may seem silly to say that a game about bashing zombies over the head with whatever objects you can find has lot it's heart but that's Capcom's latest in a nutshell. Don't get me wrong, the latest installment in the action adventure series is still a lot of fun, and if you're coming strictly for the zombie bashing, the series has never been better but Dead Rising 4 is missing too many features that made the series great to truly let it stand out.  I enjoyed my time with Dead Rising 4, and I'm sure I'm going to go back to it soon but there's no denying that it's lacking some of the features that made the originals so remarkable in the first place. 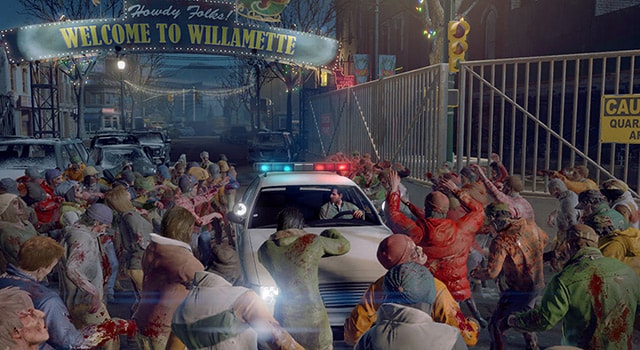 Taking place sixteen years after the events of the original game, Dead Rising 4 tries to be a return to “the basics” of Capcom's long running zombie bashing series. Original hero Frank West is back...sort of. The character's original voice actor is gone in favor of a more grizzled and older Frank; it's kind of like when Becky was replaced in Roseanne and no one said anything. The new voice actor does well enough but it just sort of feels off. We've also gone back to to the original mall in Willamette, Colorado which just so happens to have had another outbreak on black Friday. Your goal is essentially the same as the first game as well, uncover the mystery of the zombies while bashing them with whatever weapons and items you can find.

It's the later that's really the star of the Dead Rising series and is clearly at the heart of Dead Rising 4. Plenty of games make zombie killing a focal point, but no one does it like Dead Rising, and no game in the series has done that as well as Dead Rising 4. Playing through the game I was frequently amazed at how many zombies the game could handle at once, and it's pretty common to walk into an area and just be amazed at how many shambling dead are standing right in front of you. They can overwhelm you quickly too, at you'll start taking out a group of them and get the attention of the surrounding zombies. One of my favorite things in any Dead Rising game is to find a slightly elevated place to stand and watch as a sea of zombies starts surround me, and Dead Rising 4 did not disappoint in the slightest.

Of course, this is a Dead Rising game and you'll have more than your average zombie killing weapons to send those shambling bastards back to their prematurely risen graves. Almost anything you can find in the mall can be used as a weapon, from golf clubs and baseball bats to cash registers and chairs. That's a major part of what makes the Dead Rising series and more specifically Dead Rising 4 so much fun, finding new items to use as you look through the game's virtual stores. I was a bit worried that the developers were going to go too serious when they said they wanted to have it make sense where you found items but that worry was quickly forgotten when you notice just how many viking axes are thrown throughout the mall for you to find.

In fact, Dead Rising doesn't just keep the game's sense of humor, it relishes it more than any game in the series. Dead Rising 4 doesn't take itself seriously and that's painfully evident in the game, take for instance the time I spent wearing a ski suit and driving a tricycle around, jumping off from time to time to hit zombies with an electrified christmas wreath and giggling the whole time. That sense of humor in fact is never on display as much as it is with the combo weapons you'll discover. These zombie killing DIY masterpieces combine two items or vehicles  you'll find throughout the mall in fantastic fashion. Think of the fun you can have with things like electrified sledgehammers or MMA gloves with spikes or explosives taped to them. Dead Rising 4 is still just as fun as the original when it comes to it's core mechanic, smashing zombies with gleeful delight.

...no denying how much the times missions were missed. 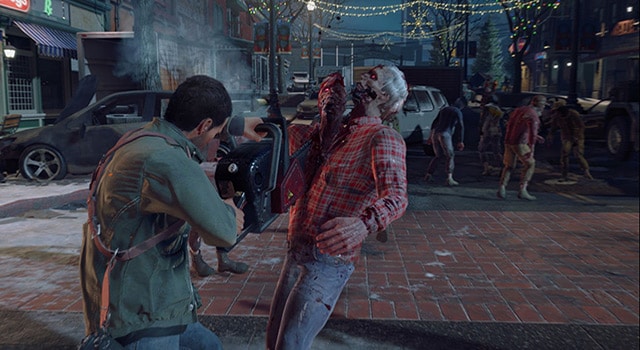 Still though, there's no denying that the game is missing a good amount of features that at least in the past have made Dead Rising as great as it is. The timed missions and scoops are completely gone in favor of what the developers have called more “freedom to explore.” While that is true and you're free to explore as much as you'd like, the game is unquestionably missing almost any sense of drama or tension. In past games you had to get to a certain spot to uncover the next mission in a certain amount of time or it was gone forever, which often meant choosing between different missions. In Dead Rising 4, I paid almost no attention to the story or missions because I didn't really have anything forcing me to. I just killed zombies as much as I want to, which is great and all but there's no denying how much the times missions were missed.

The other things that Dead Rising 4 is missing may feel small but they add up to an unquestionably lesser experience. Saving survivors is now stupid easy, as you no longer have to escort them back to the safe house, you just have to defeat the zombies right in front of them and then they happily run back there themselves. Interestingly enough they can also drop weapons and items when they're saved, and they're often better than the weapons I already have, which makes you wonder why they couldn't just use those weapons in the first place to save themselves. The day and night cycle of past games is here, but it really makes no difference what time it is anymore as zombies behave the same at noon as they do at midnight. In previous games, zombies were more aggressive at night, but in Dead Rising 4 they're always the same but there are “freshies” or recently converted zombies who run and attack faster.

Dead Rising 4 is a lot of fun if you're looking for a game that you don't have to think about. You can spend hours just finding new weapons and racking up your zombie kill meter but once you start to think about it, the experience becomes much more thin. Many of the systems and mechanics that made the originals so fun and challenging are missing and the hole they've left is incredibly noticeable.

Overall: 7/10
Presentation:
8
Gameplay:
7
Lasting Appeal:
6
CHEATfactor:
9
CHEATfactor
CHEATS USED: Unlimited Health, Easy Unlock Weapons, Unlimited Ammo, more
The trainer for Dead Rising 4 from Cheat Happens is like waking up on Christmas morning, there are so many fun and useful features that it's hard to single out one that I used more than others. Unlimited health and items are here but so is the ability to easy unlock skills and weapons that will help you get through the mall. Dead Rising 4's trainer almost seems too smart for a game like this.