Welcome to our CHEATfactor Game Review of Necropolis. We review the game and then factor in how the available cheats affect the overall game experience. For better or worse, our reviews will help you decide whether or not to use cheats when playing the game.

Reviewer's Note: This is a less than glowing review of Necropolis. Just when we finished this review developer Harebrained Schemes and publisher Namco Bandai announced a series of patches that would help with many of the problems listed in this review. While those patches should address many of the complaints this review still stands for the product that is currently available to purchase.

On paper everything about Necropolis, the long awaited dungeon crawler from developer Harebrained Schemes should work and it should work well. It combines the combat the Dark Souls series with the exploration of the Legend of Zelda and the randomness of a game like The Binding of Issac. Somewhere down the line though, Necropolis get's lost and even with the best ingredients; can't combine them to create a worthwhile recipe.  Every time I found something I liked about Necropolis something else popped up to take me out of the experience two-fold. Necropolis has all of the makings of a modern classic but unfortunately it fails to capitalize on any of them, making for a disappointing, unremarkable experience. 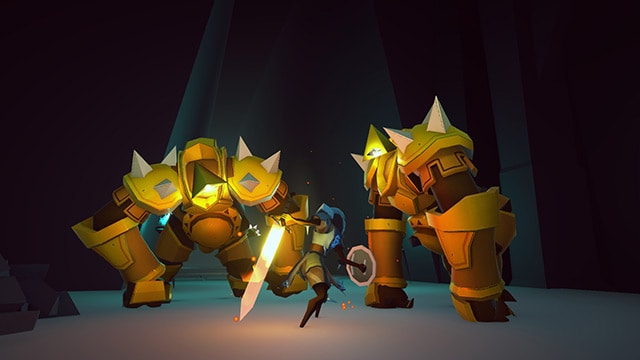 Right from the start there's not much to Necropolis but it attempts to use it's vagueness and minimalistic style to it's advantage. You  or you and three friends play as adventurers who, looking to claim riches starts at the top of a menacing structure and  attempt to work their way down to it's core. Each floor is randomly generated and the lure is always better equipment, armor and resources.  Necropolis hits so many of the industry buzz words that are so hot right now that it should be an easy sell and it starts off that well.  I loved my first few play throughs and couldn't wait to get back into it as each time I played I found something new or learned new details about the game's intentionally vague story. It wasn't long though before Necropolis' cracks started showing.

That same vagueness that makes Necropolis a mystery initially ends up doing more to hurt the experience than it does to help. At the beginning of each play through you're given a brief rundown of the controls…and not much else. There's a tongue-in-cheek type of humor that permeates throughout Necropolis and while I usually appreciate that, Necropolis does not know when to quit and as a result doesn't give you the information you need to fully appreciate the experience it tries to create. Everything from the narrator to the item descriptions is done in the tongue-in-cheek style that does more to mock you than inform you.  Sure, there's something to be said for experimenting with different items and combinations that you may find but when so few have actual visible differences it get's incredibly frustrating to have to make some of the choices the game asks you to. This isn't just for stuff like unlockables and items the game's crafting system, though easy to enough to figure out once you actually spend the time trying to, is horribly explained forcing you to spend time trying to figure out the systems, rather than exploring and engaging in combat.

And make no mistake about it, exploration and combat are where Necropolis unquestionably succeeds. Using a combination of light and heavy strikes ala the Souls series, Necropolis is at it's best when you and three other friends are wailing away at the enemies that haunt it's mysterious hallways. It could be said that the combat system in Necropolis is too much like Dark Souls since it really doesn't do much different at all.  There's a stamina bar that will stop you from spamming opponents to no end and you'll have to learn to balance it with your attacks much like the Souls series but what really made Necropolis feel unique is how it's weapons and class systems play into the combat system. Having a sword means a different attack than having an axe and that means having a different strategy. It doesn't sound like much, in fact it sounds like something that every action game does but trust me, doing it in Necropolis feels different and most importantly it feels great.

...it's not long before the game repeats itself... 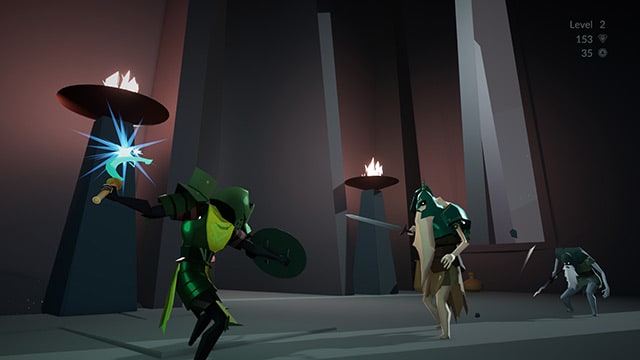 Unfortunately there's not much to use the combat on in Necropolis. Ok, so maybe I should clarify that; there's not enough to use that combat on in Necropolis. This is a rouge like dungeon crawler, meaning that everything from the layout of it's dungeons to it's enemies and loot drops are completely randomized each time you play.  On paper it's a great idea and so many games have done it well but unfortunately the pool that Necropolis pulls these resources from is seemingly too small as it's not long before the game repeats itself, and it does so a lot.  The joy of any rogue like is that you never really know what you're going to encounter or how to deal with it but Necropolis feels like it shows all of it's content way too quickly and before long I was seeing the same bas guys, the same scenarios and the same loot. Even more disappointing is how cheap the game spawns some of this stuff.  There's only one way in and one way out of each level of the Necropolis right? Then how come enemies keep spawning directly behind me? How come when I have to backtrack they are in areas that were cleared out already?

I wanted to like Necropolis. I wanted it to be the game that gets me through the summer draught. I can't, and it' not, not even close. Necropolis means well and there are times you may think you're falling in love with it, but before long it's design flaws and bugs will come up and remind you of just what you're playing. There's depth and challenge here but that does little to mask the thin experience, making Necropolis one of the most disappointing games in recent memory.

Overall: 6/10
Presentation:
6
Gameplay:
6
Lasting Appeal:
5
CHEATfactor:
7
CHEATfactor
CHEATS USED: Reset Exhaustion, Unlimited Health, Mega Gems/Tokens, more
While I did use the reset exhaustion cheat from the trainer from Cheat Happens to spam enemies and gain items and experience quicker, the rest of the trainer from Cheat Happens did little to make the lackluster experience of Necropolis any better. The cheats here are worth it; there's the reset exhaustion cheat, one for health and even one for gems but the game is still a frustrating experience trainer or not.