LAST CHANCE? A LIFETIME OF LIFETIME PLUS WHICH INCLUDES 2 MILLION REWARD CREDITS (RC) PLUS CH HOODIE!   Whats New?
We have 31,349 trainers for 7,463 Games. Get them all with Cheat Happens Premium!
LOGIN | SIGNUP

Welcome to our CHEATfactor Game Review of Mass Effect Andromeda. We review the game and then factor in how the available cheats affect the overall game experience. For better or worse, our reviews will help you decide whether or not to use cheats when playing the game.

What it is:  The long awaited follow-up to Bioware’s acclaimed Mass Effect Trilogy. Andromeda takes a risky step by introducing a new cast and world; with little connection to the original games. It’s a risk that doesn’t always pay off as Mass Effect Andromeda is unquestionably rough around the edges but there’s no denying that when it works, it works extremely well.  Fans who enjoyed the tales of Commander Shepard and crew will definitely want to follow the path to the Andromeda galaxy.

Exploring planets is a lot of fun... 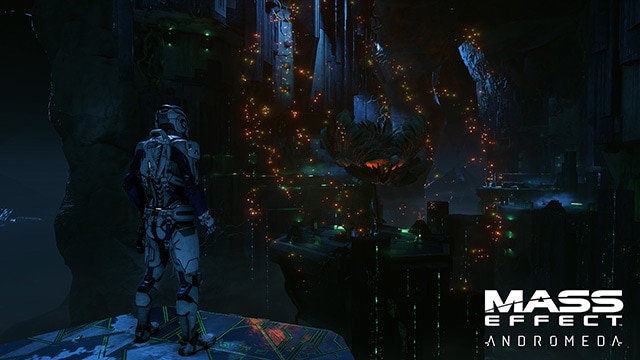 What made Mass Effect great before returns: Mass Effect has always been about exploring brave new worlds, leaving your mark...and...doing it with aliens. That all returns here in Andromeda and quite frankly, it has never felt better. The days of Commander of Shepard are over (the game takes place hundreds of years after the events of Mass Effect 3 and in a whole new galaxy) and Andromeda tells the tale of humanity’s last hope. You play as one of the Ryder twins, and your character is the Pathfinder, tasked with finding a new planet that humanity can call home.  It’s a simple story really but it allows you to do everything that you’ve always loved about the Mass Effect series; travel to different planets, meet new races and choose whether they’re friend or foe. Exploring planets is a lot of fun and they’re huge environments filled with different missions to unlock and things to explore. Throughout my time with Mass Effect there was always a sense of danger when going to a new planet or even a new environment and that’s when Mass Effect thrives.

Combat feels much more open: One of the biggest aspects of Andromeda’s new world is the combat, which feels much more fluid and open than in previous games. While much of the core combat mechanics has come over from previous games, Andromeda’s combat feels bigger and more mallable, allowing you to play how you want. Encounters often happen in large open areas and you’re free to react how you want, with simple suggestions of what to do depending on how you want to play. Key among this is that regardless of which class of character you choose to play as, you can upgrade and purchase skills for all of them. For instance I chose to be a leader character but spent most of my upgrade points unlocking biotics to use against my enemies. It’s a great addition and warrants multiple playthroughs even more than the game already did.

The new conversation system feels much more open: As important as the combat is in a game like Mass Effect, the conversation system needs to be well done and thankfully, it does not disappoint. Gone are the paragon and renegade choices as the developer choices in favor of four very distinct emotional tones. Every conversation will have either emotional, logical, professional or casual responses and the new system almost forces you to have to pay attention to the events of the story and choose the best response for the situation rather than just the way you want to play. I do wish that the game wouldn’t pull a Fallout 4 and give me a response choice and then say something completely different but the tone is usually on par with what I was looking to say.

Most of the visuals are fantastic: A game about exploring the far reaches of space should be gorgeous and Mass Effect Andromeda is mostly gorgeous. Playing at maxed out settings I was constantly looking over horizons and and gorgeously detailed environments, taking it all in. My squadmates were yelling at me to keep going with the mission but they could wait, I needed a new desktop wallpaper. Andromeda may have its visual issues (more on those a bit later) but the vast majority of the time, it unquestionably delivers in it’s presentation.

It’s a HUGE game: One thing is for sure, Mass Effect Andromeda is a huge game. Featuring multiple solar systems to explore, the world of Andromeda is nearly four times the size of that of Mass Effect 3, which was a large game itself. I was always wondering what was down that side path and where would it lead me. Could I unlock a new gun?  What about a new ability? Mass Effect has always been about exploration and that hasn’t changed in Andromeda one bit.

...you can create a pretty weird looking character... 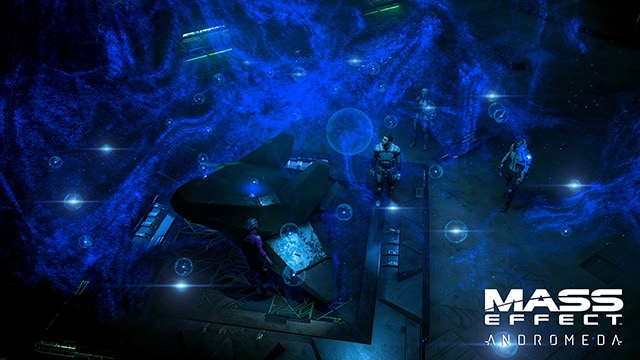 Character creation is disappointing:  One of the best parts of Mass Effect has always been making the story your own and a major aspect of that was creating the main character to be your own. While Andromeda does offer character customization at the beginning of the game, it fails in comparison to what came before. You get very few choices to make a believable character and for the first time ever in a Mass Effect game, I just went with the standard model Ryder character. For what it’s worth, you can create a pretty weird looking character if you want, just not a normal looking one.

It feels a bit rough around the edges: If you’ve been following any news on Andromeda for the last few weeks leading up to the game’s release, you’re well aware that the game’s facial animations have been the topic of discussion. Sadly, most of them are pretty rough and the game’s lipsynching isn’t much better. I remember one scene where I was talking with a squadmate who was supposed to be enraged at the actions of some of our enemies and they just stared lifelessly into the distance while talking in my general direction. There are some great performances here and even some scenes where the animations look great but sadly they’re few and far between. These small presentation aspects aren’t the only spots where the game feels rough around the edges,  aiming, especially with most of the early level guns feels floaty and tough to master.  I also had several issues with the camera during big boss fights.

Conclusion
Despite all of its missteps, I still had a blast with Mass Effect Andromeda. The majority of the franchise’s key mechanics return and some of them have even been tweaked to get more out of them. There’s no denying that it has issues, and those facial animations can be rough to say that least but above all; Mass Effect Andromeda delivers a fast paced, interesting shooter that get’s better when you put in the time that the game demands.  Andromeda may not be the masterpiece it could have been, but it’s definitely not the disaster you’ve heard about either.

You’re humanity’s last hope. Everyone is depending on you. Why leave it to chance? The trainer from Cheat Happens for Mass Effect Andromeda features a number of different options that will help you explore the great unknown. Mega health, shields and ammo help dispatch your foes while mega skill and research points will allow you to keep unlocking cool new abilities to use in battle.

Keep with Cheat Happens for more on Mass Effect Andromeda!