Welcome to our CHEATfactor Game Review of Hearts of Iron IV. We review the game and then factor in how the available cheats affect the overall game experience. For better or worse, our reviews will help you decide whether or not to use cheats when playing the game.

I'll always remember the sort of strange way I was introduced to the Hearts of Iron series. It was in just about the middle of my senior year of high school and I had gotten into a conversation about how much I loved alternate history stories with one of my teachers. He was that young and hip type of teacher who the kids could identify with. I had just written my first ever game review for my school paper (first published review anyway) and he pulled me into his classroom to show me something on his computer; launching the original Hearts of Iron. I was hooked and spent the majority of that cold Wisconsin winter figuring out the game's systems and writing my own history. Now that the fourth game in the series has come out and I'm a grown adult with a house and responsibilities of my own I'm just as engrossed thanks to typical depth but fantastic possibilities.

...it gives you a wealth of possibilities. 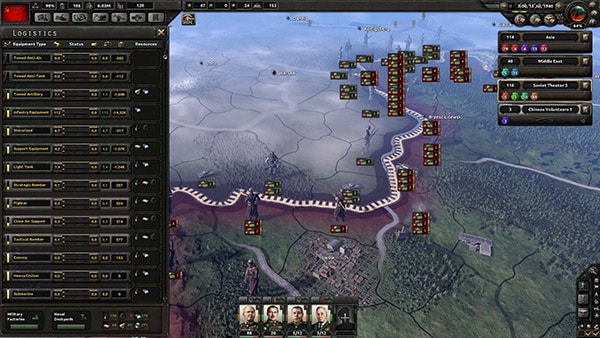 In truth, it's hard to recommend Hearts of Iron, or really any game from Paradox Interactive to someone who hasn't played it. It's not a pick up and play game; it's a game that requires notes and the ability to pour over resources endlessly but for fans like me the payoff is more than worth the investment. Hearts of Iron IV is different than most games from the developer though as it's not really a large scale sandbox game, it's a focused game that doesn't really give you complete freedom as much as it gives you a wealth of possibilities.  While the two may seem similar, and in ways they are; Hearts of Iron feels like a more focused game as a result.

The game is set in the second World War, and more precisely between the years of 1936 and 1999. That's important because Hearts of Iron doesn't mess around with authenticity. Literally any nation that existed in the time period is playable from super powers like the UK, Germany and the United States to smaller nations just trying to get by. This can be extremely intimidating for players new to the series but Hearts of Iron IV does a pretty decent job of at least trying to introduce players to series' core mechanics. Please note, it's still going to take a lot of time and dedication to fully understand and appreciate what makes the game tick but Paradox will at least help you get the basics down so you can try your hand at mastering the game's intricate systems.

While all of this may seem like it's a lot of work, those who have played the previous games know that the end result is more than worth it. Again, every nation that existed during the game's three year period is playable and while the super powers of the world like the United States, France and Germany have much more detailed and fleshed out campaigns; it's a lot of fun to take a much smaller nation, customize it and see what you can accomplish. This is a major change from previous games where you would have to wait for support for other nations to be added, and it's a very welcome change at that. Can a small nation tip the scales of the war in a certain direction and change the course of history with their support? It's a big task but it's all the more rewarding when it does happen. Of course, the bigger countries have opened-ended possibilities too, like does Germany's focus change completely and have a peaceful strategy? The possibilities are literally endless.

I was almost constantly surprised... 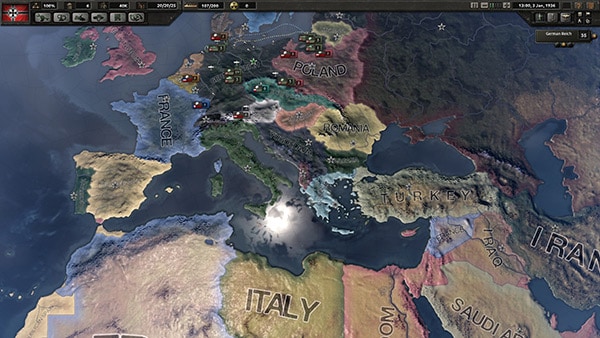 Props have to be given to Paradox Interactive for thinking ahead and preparing for those possibilities in entertaining ways. In nearly every play though I made it a point to try to something different, whether it be trying to bring a smaller country into power or toppling a new nation. In nearly every case the game was prepared for it and sometimes in great detail like having a flag already made for a new country that was just created. This went a long way towards keeping me in the game as I was almost constantly surprised by the depth of possibilities here.

There's really no way around it, you're responsible for a lot in Hearts of Iron IV. You're a military commander but you're also worried about the logistics of transporting war materials from factories across your country, you're responsible for the economic well being of your nation and much more. As a result longer play sessions can often start to feel like busy work, adjust this slider, change that stat, make that decision. It's possible to get so bogged down in the day to day operations here that you miss out on some of the bigger picture events, which at least for me made me lose a bigger appreciation for the game.

Like most games from Paradox Interactive, Hearts of Iron IV is not for everyone. It's less of a game and more a meticulous simulation time sucker that rewards complex understanding of systems and ideas. While it can be intimidating the rewards for players who are looking to put the time and effort into the experience are through the roof. History buffs, your definitive experience is here, now get to work.

Overall: 8/10
Presentation:
8
Gameplay:
8
Lasting Appeal:
8
CHEATfactor:
10
CHEATfactor
CHEATS USED: Add Political Power, Set Tension/Threat, Fast Production, more
The trainer for Hearts of Iron IV is like having the world's largest army, the world's best political minds and the most economic power in the back of your pocket. Adding nearly every bit of influence and power you can think of is a great feature to have, as is the number of different cheats that allow you to play the game at the speed and level you want. Want to set a tension/threat level go for it. Want your factories to produce even faster than normal? It's at your fingertips.