Welcome to our CHEATfactor Game Review of Dishonored 2. We review the game and then factor in how the available cheats affect the overall game experience. For better or worse, our reviews will help you decide whether or not to use cheats when playing the game.

With Dishonored 2, developer Arkane Studios is using the Walt Disney approach. In the 50s and 60s when Disney knew an attraction in Disneyland needed updating he wouldn't try to reinvent the wheel, he would just “plus it” and add to it. Dishonored 2 get's similar treatment from it's predecessor, it's not that much different but is rather a finer tuned version of what came before. The level design is fantastic, the gameplay is quick and responsive and the entire package feels much more refined. Dishonored 2 is more of everything you loved about the first Dishonored, and that's a very good thing which makes it one of the best games of the year.

...has a major effect on how you'll play through the game... 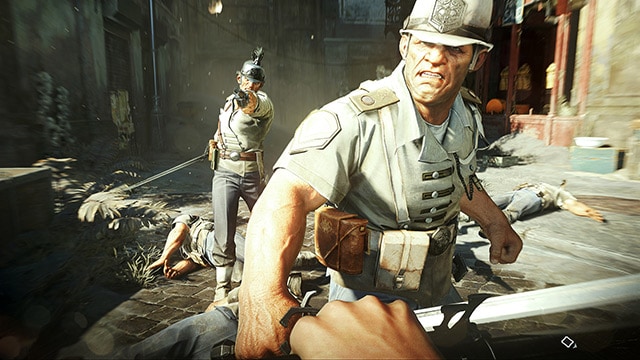 Picking up roughly fifteen years after the events of the original Dishonored, the sequel finds Emily sitting on the throne of Dunwall, that is until someone claiming to be her aunt and thus the rightful heir to the throne following the death of her mother, comes in and disrupts things. Her goons attack and it isn't long before you're faced with the first real choice of Dishonored 2, whether to play as original protagonist Corvo or assume the role of Emily herself. At first it seems like a pretty pedestrian choice as both will let you do Dishonored type things but the choice has a major effect on how you'll play through the game and what type of abilities you have.

While both will let you sneak through the city and take out enemies in both the stealth and kill first, ask questions later variety, both have very distinct ways of doing it. Corvo plays most like the original Dishonored and has mostly the same powers with some key additions. The most useful of this addition by far is the possession ability, which does exactly what it sounds like to unsuspecting enemies but can be leveled up to a point where you'll be able to take over corpses (what fun!). Emily on the other hand uses her shadow based powers to chain together attacks on enemies and move just a little bit sleeker than her father. Now I understand that the choice really just sounds like which flavor of deadly ice cream you'd like but your choice of which character to play as and thus which powers to use have a big impact on your play through, especially in the later levels.

That's thanks mostly in part to to the game's utterly fantastic level design. While the original game took place in Dunwall, a city nearly deserted due to the rat plague, Dishonored 2 takes players to Karnaca, which is very much alive. It's brimming with colors, people, industry and perhaps most importantly fantastic opportunities to use your pistol, crossbow and abilities.  Much like Dunwall in the first game, karnaca is a literal playground for you and your abilities, featuring multiple paths and ways to complete objectives. I love that there is content here in Dishonored 2 that you likely won't see on multiple playthroughs and stumbling into something like a side mission, new path or a valuable clue from an NPC feels completely organic and just as rewarding as it did in the first game.

...is constantly changing its mechanics and delivery... 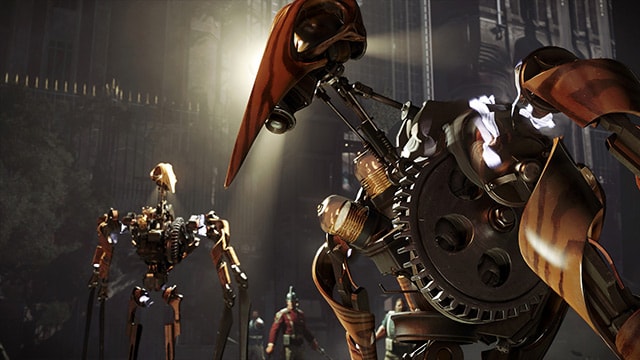 That rewarding feeling is common in Dishonored 2. Sure, you can just jump into action and hope for the best but the best moments in Dishonored 2 are when you see a situation, assess for it, plan and execute (literally). Stringing together a slew of attacks and clearing out a section of enemies without being seen or killing anyone belongs on a list as one of the most rewarding feelings in modern gaming. That's especially true since Dishonored 2 never rests too comfortably on it's laurels and is constantly changing its mechanics and delivery, forcing you to change the way you play entirely.  This is especially true in the game's later levels that introduce new mechanics constantly, like my favorite, the clock based level that itself is constantly changing and forcing you to evolve.

Dishonored 2's world truly comes to life throughout your time with the game but I was a bit dissapointed that the game's main antagonist and thus its main story seem so flat. The story of Emily being removed from the throne is essentially a reason for you to sneak around and stab dudes but there's little character growth here. Don't get me wrong, there is in the game's secondary stories and world but the main quest just sort of falls flat and doesn't go anywhere.  Of course, the main story in the game is the one that you'll create so it's easy to ignore it.

Dishonored 2 doesn't differ much from the first game and that's okay since the original game was so stellar. It does however add new depth to the already well done gameplay and even more fantastic level design. Dishonored 2 is easily one of the best games of the year and should more than please fans of the original.

Overall: 9/10
Presentation:
9
Gameplay:
9
Lasting Appeal:
9
CHEATfactor:
10
CHEATfactor
CHEATS USED: God Mode, Super Stealth, Unlimited Mana, more
In Dishonored 2 the main appeal is the freedom that you have to accomplish the goals in anyway that you'd like and the ultimate embodiment of that is that trainer from Cheat Happens, which gives you the ultimate freedom. Want to be a completely invisible god mode that can sneak through the world without worrying about being seen? What about using as much magic as you want without worrying about losing mana? Hell, why even worry about taking damage? It's all possible with the trainer from Cheat Happens!