Welcome to our CHEATfactor Game Review of Total War: Warhammer. We review the game and then factor in how the available cheats affect the overall game experience. For better or worse, our reviews will help you decide whether or not to use cheats when playing the game.

Have you ever had two friends that you know would be great together if only they'd meet? Those two friends are the Total War series and The Warhammer series and not only have they met, they've had a baby. Awww, it's got it's father's lore and look at that, it's got it's mother's addictive gameplay and huge battle systems. When games combines with other games it's rarely this good, but Total War: Warhammer manages to not only be the exception to the rule, but save for a few small hiccups it allows two series seemingly stuck in their own rules to create an identity all it's own.

...feels a lot more fresh and new as a result. 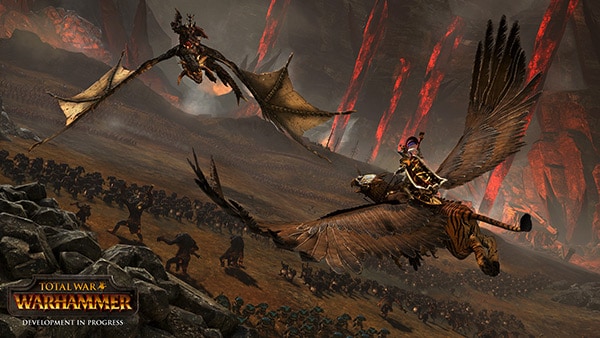 As much as I've loved the Total War series (check my reviews, I've had enjoyed them plenty), I can't help but wonder why something like this hasn't been done before. While games like Total War: Atilla and Shogun are addictive and fun in their own right, they're bound, at least in part by the shackles of history and realism. With the addition of the Warhammer franchise that's no longer a problem and the long established franchise feels a lot more fresh and new as a result. Here, giant infantry troops, winged archers and other fantastical ideas swarm the battlefield, giving you both new possibilities and new problems to solve. Bigger both in scale and  ambition, Total War: Warhammer feels much like a series on the upswing.

In all honesty, Total War: Warhammer plays much like previous games in the series; choose a faction, lead them in both battle and diplomacy as you do battle and trade with neighboring factions. It's these factions that really make Total War: Warhammer stand out from it's predecessors. The Empire is most like playing previous games in the series as they're an organized military force and great for beginners who may be experiencing the Total War franchise for the first time.  Your other choices though are where the game truly opens up and you start to see the potential these two franchises meeting comes with. The Green Skins are their opposite, surviving on their bloodthirsty nature and need for chaos; they're more successful when they're  wrecking havoc. Similarly, the undead vampire like race are prolifically proficient at dealing out violent deaths for opposing troops, and resurrecting those who have died on the field. I often found myself playing as the Dwarves though as they require a combination of teamwork, might and improvisation to be more successful in battle.

This it Total War though and being successful in battle is only part of the experience. Like in previous games you can take control of an entire country and do your best to guide their economy and diplomacy into a new age. The Empire has a clear advantage in this as their reputation and might allow for easier alliances and trade partnerships with other countries. Contrarily, the vampire like faction has the complete opposite luck and is pretty much the scorn of every other race. Even the Greenskins which really have no political agenda whatsoever require a ton of micromanaging as if you're not doing enough killing inner turmoil will build to the point of an almost civil war of it's own. Each playable race has it's own full campaign and i's a lot of fun to experiment with different scenarios.

I couldn't help but be disappointed... 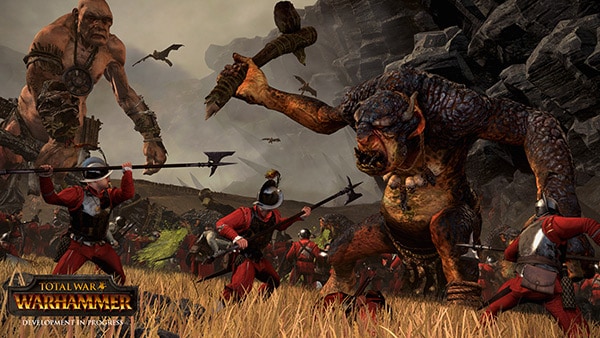 Each faction also gets the choice between two heroic leaders to start your game with. Your choice will effect a good amount of how your game plays out as your troops will react differently based on who you choose and what you do. Some of the choices may seem a bit negligible but the difference between having an extra wizard unit to cast magic or an infantry that will fight to their last breath since they're so inspired by you makes a ton of difference in the final moments of battles. These were never decisions I agonized over but I did question them during the game's biggest moments. I just wish I would have seen more of these moments. The game has a habit of hiding some of the biggest moments of the quest system off in the distance to a point where I could not get to them with the amount of turns I had. Did it make me play again? Sure, but I couldn't help but be disappointed when I kept missing huge moments in the game.

Total War: Warhammer isn't perfect though, as it still suffers from, well, let's call them Total War-isms. There's still not a really comfortable camera angle between zooming all the way out to see the whole battlefield or zooming all the way in to to see things up close. Though the AI has been improved and will flank you at times they'll still charge at a fully stocked defensive unit that they're sure to die from. Though I did see some slowdown and an occasional crash, Total War: Warhammer performed remarkably well, especially when the battles go heavy.

Fans of Total War may not be fans of War Hammer and vice vera but they may be after playing this. It's a remarkably fun game that combines the mythos of the established Warhammer franchise with the systems of the Total War franchise and the result is something that somehow feels familiar and new at the same time. You've never seen the Warhammer universe from this angle before and Total War has never felt quite like this. Total War: Warhammer is one of my favorite games of the year.

Overall: 8/10
Presentation:
8
Gameplay:
9
Lasting Appeal:
8
CHEATfactor:
10
CHEATfactor
CHEATS USED: Super Lords/Heros, Fast Spell Cooldown, God Mode, more
Total War: Warhammer adds a ton of different features to the Total War franchise and the trainer similarly adds a ton of cool features to customize the game. Want to be more powerful on the battlefield? You got it. Want more diplomatic power and influence? It's yours. I was very impressed with just how much the trainer featured. Then again, you can just add the god mode cheat and giggle as you take out an army of giants as dwarves.