ALL NEW TRAINER MANAGER 2.0 HAS BEEN RELEASED AND IS NOW AVAILABLE FOR DOWNLOAD!
We have 27,007 trainers for 6,693 Games. Get them all with Cheat Happens Premium!
LOGIN | SIGNUP

Welcome to our CHEATfactor Game Review of Killing Floor 2. We review the game and then factor in how the available cheats affect the overall game experience. For better or worse, our reviews will help you decide whether or not to use cheats when playing the game.

Killing Floor doesn't mince words and it wants you to know up front just what it's about; killing things with loud guns and doing it quick. It's a formula that works seemingly despite itself, it's fast, fun and rewarding but fails to offer anything new and as a result ends up sort of like a first person shooter greatest hits offering instead of creating it's own unique identity. Still though, there's no denying that Killing Floor 2 is unquestionably good at what it does and if you're looking for a fun diversion for you and three friends then gear up.

...it's surprisingly good at these basic mechanics ... 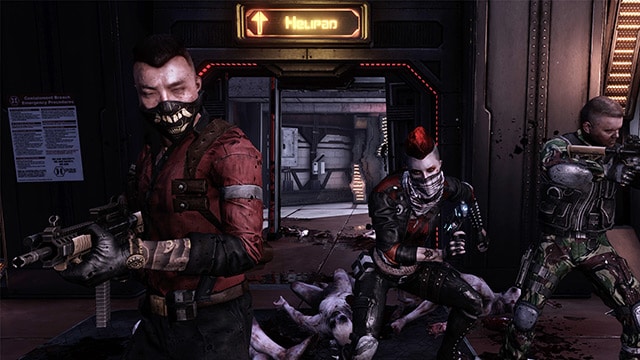 In a year when first person shooter games are trying incredibly hard to offer a complete package to players, Killing Floor 2 is unapologetically itself. There's no campaign to speak of, or extra modes, it's an online shooter that's most concerned with FPS 101, it pits you and your friends against fast moving and aggressive monsters.  The good news is that it's surprisingly good at these basic mechanics and its minute to minute gameplay is a complete blast when it's firing on all cylinders. Enemies come at you fast in Killing Floor 2, but luckily your guns fire just that much faster. It's all presented under a loud heavy metal guitar riff that keeps you moving forward and looking for your next kill.

ithout any real characters or plot to speak of, the real stars of Killing Floor 2 are unquestionably the guns you'll wield. While most are your typical shooter artillery like shotguns and automatic rifles, there are a number of super powerful more rare weapons, like the microwave gun that change the way you'll play entirely. Even the standard guns though feel great in your virtual hands; they're loud, responsive and deal just the right amount of damage to deal with enemies but still give you enough of a challenge. There are ten classes in Killing Floor 2 and though each of them can use just about any gun in the game, it's a lot of fun to mess around with them and see where they can be best used in the game, especially if you've got a likeminded group of squadmates who are as ready to experiment as you are.

While Killing Floor 2 is unquestionably good at the basics, there's no denying that it's a limited package with some questionable additions and missing features. The ten different classes are great and all but they all feel incredibly similar until you reach a higher level and it can be a definite slog getting there. In fact, much more of the game opens up at later levels but it can take an excruciatingly long time to get to those levels. The strangest thing is that to reach some of these later levels Killing Floor 2 requires you to buy certain guns and perks that don't line up with your specific class type. Luckily the game does let you level up classes that you're not actively playing as, so you're not completely screwed if you end up changing your playstyle or justify the weapon you just purchased. 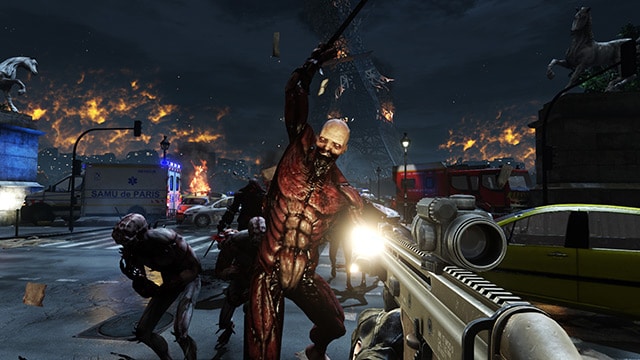 Some of my favorite moments in Killing Floor 2 happened during the game's boss battles. They're unforgiving to players who don't learn the game's systems and are quick to punish those who refuse to work together in game. As I played through the game I waited for more boss battles, but they never came. There are literally two boss battles in the game that constantly repeat themselves. It's really a problem with enemies in general in Killing Floor 2, the game throws plenty of them at you but they're often the same ones over and over and they're often take directly from other games like the zombie enemy whose bloated and throws up. Wonder where I've seen that before?

There's really not much else to Killing Floor 2. There's a player vs player mode and some other things to tinker with but that's about it. That's not necessarily a bad thing though as Killing Floor 2 knows what it's good at and excels in it. It's fast, fun, frantic and incredibly rewarding, I just wish there was more of it to go around.

Overall: 7/10
Presentation:
6
Gameplay:
7
Lasting Appeal:
4
CHEATfactor:
8
CHEATfactor
CHEATS USED: Super Health, Add Money, Add Grenades, more
Much like the game itself, Killing Floor 2's trainer from Cheat Happens is limited but what is here is incredibly useful. There are cheats like unlimited health, ammo and grenades to help deal with waves of enemies as well as a cheat to add money to get upgrades faster. The trainer is unquestionably useful when the game gets most tough, and combined with the rocking soundtrack can make you feel like an unstoppable monster.