Welcome to our CHEATfactor Game Review of Mighty No. 9. We review the game and then factor in how the available cheats affect the overall game experience. For better or worse, our reviews will help you decide whether or not to use cheats when playing the game.

Playing through Mighty No. 9 I couldn't help but picture a little kid trying so hard to be like his dad. He's flopping around in his shoes, complete with tie loosely around his neck. He's watching him shave in the mirror, practicing with an empty handle, soap and water. Mighty No 9 tries so hard to be the new Mega Man and while it comes close to recreating the feel of the blue bombers adventures, it fails to recreate what was most important - the long running series heart. What's perhaps most sad is that there are moments where the game begins to create it's own identity, and it's a good one; only to continue to try to shoehorn itself into shoes that won't fit. After all the buzz, hype, promises and delays; Mighty No. 9 is one of the biggest disappointments in recent memory. 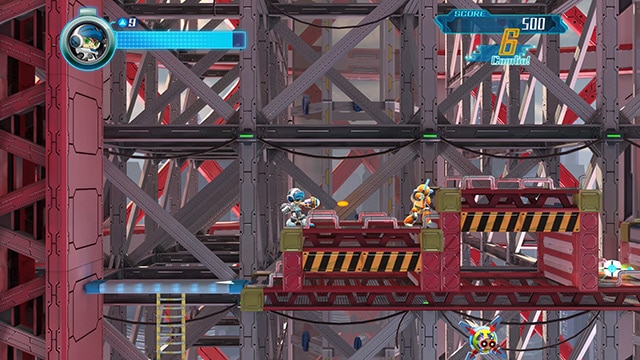 It didn't have to be though as Mighty No. 9 comes from some pretty strong lineage. Created by Keiji Inafune, who also happened to create Mega Man, as an answer to Capcom's refusal to continue the series in any meaningful way; the game came with loads of potential and promise. Over 67,000 backers pledged over $3 million to help the game get made (if that number seems made up just watch the game's four hour end credits, which thanks each…and every…backer). Why is this important? Because if anyone could recreate the Mega Man experience it was this man, with this team, with this budget. Sadly though, Mighty No. 9 has become a lesson in how not to deliver to your fans on potentially career ruining levels.

At first glance Mighty No. 9 plays the part and it plays it well. You play as an armor clad little guy named Beck, fighting against a sea of robots who want nothing more than to scramble your circuits. You've got your arm cannon and something that resembles the dash attack from Mega Man X. Similar to the Mega Man series you're able to attack any of the game's stages in almost any order you like (there's an intro stage you'll have to do first and a few more that unlock once you complete each of the game's regular levels). After beating each level's boss you'll obtain their power and be able to use it in the next stage. Sounds a lot like Mega Man right?

While Mighty No. 9 follows the Mega Man recipe pretty faithfully it never seems to fully grasp just what made the series so special to so many people. Take the game's level design for instance, while each of Mega Man's levels felt like unique creations that required strategy and clever thinking to pass through, all of Mighty No. 9's stages feel like bland layouts that just go through the motions. Not a single one stands out to me after finishing the game and each could be easily switched out with another thanks to their similarities. There also isn't much strategy to deciding which order to tackle the game's stages in. Just the thought of the Mega Man games brings back memories of waking up early on Saturday mornings and writing in my notebook  which order seemed like the best to take down each boss but I ever got that with Mighty No. 9. Each stage could be completed with Beck's standard arm cannon and it didn't really matter if you took out not-Rock Man or Not-Ice Man first. 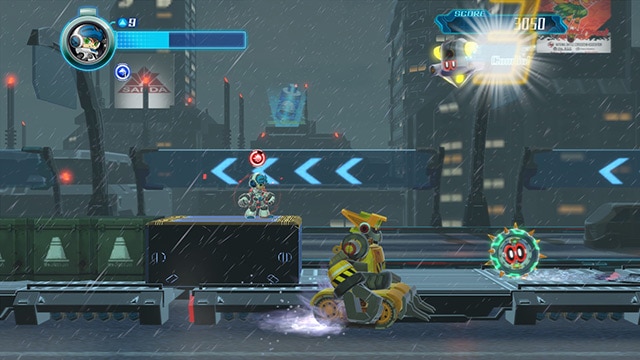 The funny thing though? Mighty No. 9 flirts with the idea of creating it's own identity, and it's almost a success, until it stumbles on it's own feet. There's some pretty solid action platforming going on here and to be successful, you're going to need to master most of the game's systems. Take the game's dash ability for instance. You damage  each enemy enough with your hand cannon and then use the dash to finish them off, temporarily getting access to buffs and abilities.You'll pretty much be using it I on most of the game's enemies and I absolutely hated it when I first started playing Mighty No. 9. The more and more I played though, the more it became evident that dashing was integral to being successful in Mighty No. 9. The game throws a lot of enemies at you at once and you'll have to learn the game's rhythm to be successful.  It's not a match for the depth and strategy required for one of the original Mega Man games but its a nice discovery.

Despite what Capcom may believe Mega Man deserves to be right next to Mario and Sonic on the video game Mount Rushmore, but Mighty No. 9's Beck is standing on the ground, looking up and wondering what could have been. The game is so worried about being the next Mega Man that it doesn't bother to create an identity all it's own. There's fun to be had in Mighty No. 9, but there's no denying how much of a disappointment it truly is.

Overall: 5/10
Presentation:
7
Gameplay:
6
Lasting Appeal:
5
CHEATfactor:
6
CHEATfactor
CHEATS USED: Float Mode, Double Speed , Super HP, more
I was having the most fun with Mighty No. 9 when it tested me with an almost absurd amount of enemies on the screen at the same time. I'm not afraid to admit that I died trying to earn the game's systems and rhythm more often than I was successful but things got a bit easier with the trainer from Cheat Happens. Featuring features like float mode and double speed, you're able to move quicker and react to the game's changes a lot more readily.