Welcome to our CHEATfactor Game Review of Inside. We review the game and then factor in how the available cheats affect the overall game experience. For better or worse, our reviews will help you decide whether or not to use cheats when playing the game.

This is going to go against everything I know but I don't want you to read this review; at least not yet anyways. I want you to go into Inside, Playdead's follow up to the cult classic Limbo as green as possible, then come back here and we can talk about it. Why? Inside is quite simply like nothing else I've ever played before and so many times during my roughly five hours with the game I became amazed at just what was happening and how easily the game took complete control of my emotions. Brilliant and haunting in utterly every way, Inside is the follow up that Limbo so rightly deserved but it's also an instant classic in it's own right.

...packing a much more visceral punch... 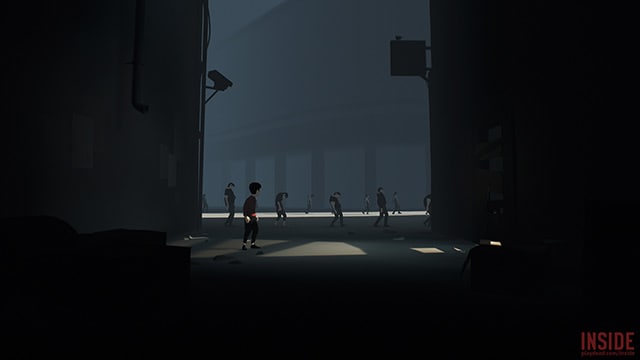 Right from the start , Inside seemingly has a lot in common with it's predecessor. You play as a young boy, lost in a dark and dreary world, on the run from...something. This is where the similarities to Limbo (mostly) stop. It becomes very clear very quickly that Inside is packing a much more visceral punch than anything that came before it. Big brother like figures stand off in the distance with flash lights looking for you, dog's frantically search for your scent, alarm sirens blare far from far off. It's hard to explain just what Inside is and why it's important, not because it's hard to follow but because it's something that needs to be played, controller in hand to fully understand and appreciate. Inside is a very personal game and it's one that's played best in a quiet room with lights off and some really good headphones but at the same time it's a game that I just couldn't wait to show everyone I knew.

That immersion goes a long way in creating the complete Inside experience. This is one of those rare games that everything seems to work. From the very onset of Inside's roughly five hour campaign the game made me feel emotions that few interactive experiences really do. I was in awe, I was terrified, I was hopeful and I even hated the decisions I had to make. What's amazing is that much like Limbo before it, it's able to do so without so much as a single word. PlayDead's signature style comes through here and it comes through even better than in previous experiences. There were so many moments here where I absolutely needed to talk to someone about what I saw. Limbo may not have the scale of a AAA big budget release but it was by far one of the most emotional experiences I've ever had in any medium.

What's amazing is how Playdead manages to do all that with some of the most simple gameplay mechanics. Much like it's predecessor,Inside can most easily be described as a physics based puzzler, but that doesn't even begin to describe why it's so special. Most puzzles can be solved by simply pulling something or pushing it. The solutions are so simple that my brain, which has been trained by decades of playing games was looking straight past what I needed to do. The game is full of those "ah-ha!" type moments that you'll feel so smart (and slightly stupid at the same time) when you figure them out. Inside is at it's best though when it takes these puzzles and layers them on top of each other and you'll have to change the way you're thinking to be successful. For instance in one room you're presented with a ladder to get to the next section, but that is three solutions away. It may be a bit of backtracking but it's handled in a way that doesn't make it feel like that.

...can only be considered a modern classic. 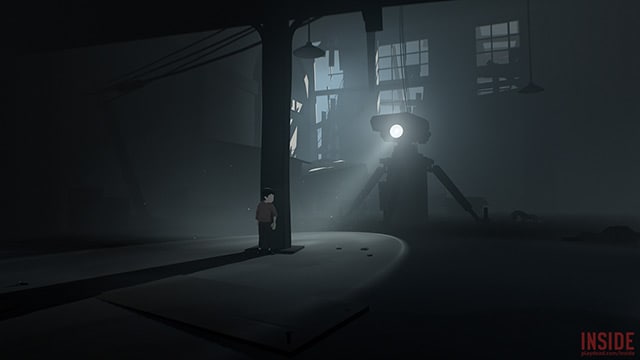 Some may call attention to Inside's short five hour length as a downfall and while it may be shorter than most games these days there's something refreshing about being able to sit down and spend an afternoon completing an entire story, especially when it's as well done as this. Inside is much more of a game type experience than Limbo though as there are different collectibles to find and a secret ending to unlock but these are best left to second or even third play throughs; trust me, just let Inside show you what it's about and you won't regret it. This is one of those games that you'll be talking about for quite some time and the extra curricular activities only add to that experience.

Five years from now you'll be playing the remastered version of Inside. Much like with Limbo before it, Playdead has crafted what can only be considered a modern classic. It's emotional, remarkably smart and will stick with you long after the credits have rolled. I know that with reviews everyone looks at the score. Don't look at it, it doesn't do the game justice...just take my advice -  play this game.

Overall: 10/10
Presentation:
10
Gameplay:
10
Lasting Appeal:
9
CHEATfactor:
0
CHEATfactor
As of this writing there are no known cheats for Inside. Stick with Cheat Happens for more as they become available!