Welcome to our CHEATfactor Game Review of Bulletstorm: Full Clip Edition. We review the game and then factor in how the available cheats affect the overall game experience. For better or worse, our reviews will help you decide whether or not to use cheats when playing the game.

What it is:  The remastered version of one of the most criminally overlooked shooters in recent memory. When it was released in 2011, Bulletstorm was a crass but fun thrill ride that leaned heavily on it's surprisingly solid shooter mechanics. Over six years later and not much has changed, Epic and People can Fly's shooter is still great fun, still crass and still a really solid shooter, it's just a bit prettier than it was last go-round. Unfortunately the visuals make up the most of this remaster and there's not much new in the way of content but it's still a lot of fun to play through the game again. 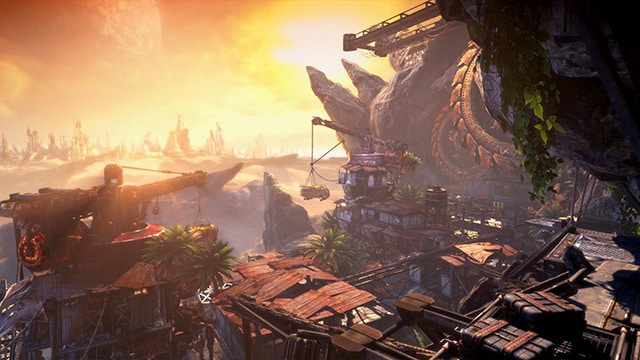 It's still a ton of fun: Bulletstorm came along just when it was needed. Shooters were serious and wanted to teach you a lesson. All Epic Games and People Can Fly wanted to do is remind you how fun a shooter can be...and let you kick a dude in the balls while doing it. Bulletstorm is fast paced and reminiscent of the shooters of the early 90s, like Doom and Duke Nukem (that's fitting), who only want you to have fun and feel like a complete badass. One of Bulletstorm's greatest strengths is moving you from one giant action set piece to another. One minute you're shooting cars of enemies as you try to escape a giant wheel that's gone rogue and the next you're piloting a giant mechanical t-rex with lazers, mowing down enemies (yes, that actually happens). There isn't really much of any downtime with Bulletstorm: Full Clip Edition.

The skillshot system: At the heart of all of this though is the game's unique skill shot system. Sure, you could play through Bulletstorm like any other shooter but where's the fun in that? Bulletstorm begs you to be as creative as possible and think outside the box with how you'll dispose of your enemies and then rewards you for it. For instance launching your enemies in the air with your electro-charged leash and shooting them down before they fall is called trap shooting and shooting a guy in the butt is...ahem...rear entry. It's a lot of fun to survey an area or equip a new weapon and see just what you can do. I've played through the game multiple times since it's initial release and I'm still finding new skillshots that I didn't know about.  Even better you can take the skill shot points you unlock and use them to buy things like more ammo, augmentations for your weapons and more.

It's a great shooter. Period:  None of this would work though if Bulletstorm wasn't a mechanically shooter but thankfully, it's more than solid.  The weapons feel weighty and solid in your virtual arms and it's satisfying as hell to empty a clip onto an enemy, and even more so when it's a unique weapon like the sniper rifle which allows you to steer the bullet ( and then later on detonate it). Even something as simple as movement feels great in Bulletstorm as you're able to run without worrying about a stamina meter and slide, which can make for some pretty cool moments and skillshots.

Duke Nukem: Those who pre-ordered Bulletstorm (or shelled out a few extra books) get access to Duke Nukem's Bulletstorm Tour, which places the legendary badass in the shoes of Bulletstorm's original main character and the results are a mixed bag but mostly succesful. The world of Bulletstorm is a natural fit for Duke's type of humor and action and if you squint your eyes you may trick yourself into thinking that you're finally getting the Duke Nukem game we've been waiting all these years for.  But it's also pretty rough around the edges and while the original voice of Duke Nukem has re-recorded many of the lines to give them more of the character's style, the rest of the game remains untouched and the other characters even refer to Duke as Gray, the name of the original main character in Bulletstorm. 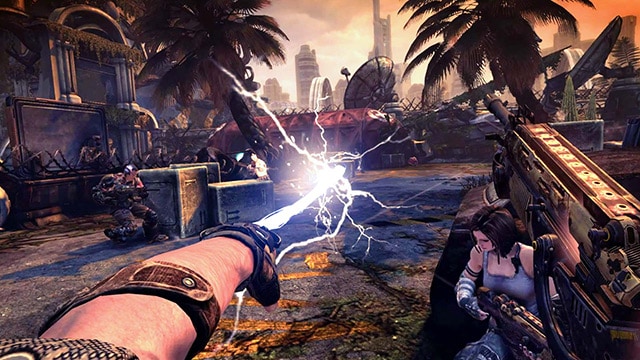 The humor is still an acquired taste:  When it was first released, Bulletstorm's in your face type of humor wasn't a universal hit and it's sure to not be today either. For instance the moment when a female character told me and my AI partner that she was going to ahem…'kill my dick.' It's crass and over the line but to its credit Bulletstorm owns it and never looks back. Just be prepared that you're either going to love the humor or hate it and there's not much inbetween.

There's not much new here: While this new version of Bulletstorm looks better than the game ever did, I was really hoping we'd see some new content.  The Full clip edition does bring together all of the game's DLC and extras but if you saw all that the first go-round, and you're not dying to revisit the game's location there's not much else for you to see here. I would have loved some deleted scenes or extra content, anything really.

Conclusion If any game deserves a remastered edition, it would be Bulletstorm. It went criminally underappreciated when it first launched in 2011 but now it's back and much prettier for a whole new audience. I still wish there was no content here for returning fans like myself but the game is still a blast to play through as is and defintely should not be overlooked if you're in the market for a good, quality, fun shooter.

Overall: 8/10
Presentation:
8
Gameplay:
8
Lasting Appeal:
8
CHEATfactor:
8
CHEATfactor
CHEATS USED: Change Skill Points, Unlimited Ammo, One Hit Kills, more
The trainer for Bulletstorm: Full Clip Edition is much the same as the one for the original game. Here’s what I said about it then: It's a simple equation really, in Bulletstorm, you get more cool weapons and perks for more skillpoints. The equation becomes even more simple with the addition of the CheatHappens.com trainer. Not only can you get additional skill points, you also get easy kills, unlimited ammo, no weapon overheat and even infinite leash strength. The trainer for Bulletstorm is one of the best of the year so far, and a must have for anyone looking to get even more out of one of the year's best games.