Welcome to our CHEATfactor Game Review of Conan Exiles. We review the game and then factor in how the available cheats affect the overall game experience. For better or worse, our reviews will help you decide whether or not to use cheats when playing the game.

(Reviewer's note: Conan Exiles is currently available in Early Access and should be viewed as a work in progress. This review is based on the current incarnation of the game available on Steam)

What it is:  A mostly online survival MMO set in the world of Conan (the barbarian, not the talk show host). Exiles does the whole survival MMO thing well but it doesn't really do anything to set itself apart.  It is an impressive entry in the genre, but it's early access bugs rear their ugly heads, and they do so often. Even so, if it keeps going on the path it's seemingly been set on, Conan Exiles has a chance to be a real standout in an increasingly crowded genre. 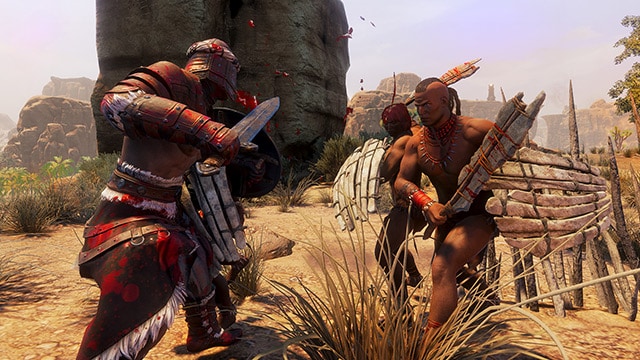 Character creation is deep: By now if you've heard anything about Exiles, it's likely the game's lax policy on nudity and just how...ahem...creative someone can be with their character's unmentionables. Yes, you can be as gracious as unforgiving as you want with all of your character but in truth the whole character creation suite is pretty impressive. It really does help to create a much more unique world and even more important, a much stronger connection from the player to the character and the world around him, a huge thing in a game like this. Part of the fun I had with Conan Exiles was just finding all of the unique items and characters you'd see around the world.

It does the basics very well: There isn't much that Conan Exiles does that sets it apart from other open world survival games but damn does it do the basics well.  Most easily compared to games like Ark: Survival Evolved and Day Z, Conan finds you hunting, gathering and fighting for your survival and the developers have managed to make nearly all of it fun and interesting to play.  For what it's worth the game doesn't do a great job at explaining the world's rules to the player and you have to figure out how to do a lot on your own but it's pretty damn satisfying when you do figure it out. The game relies a lot on you exploring and trying to figure out what does what and sort of relies on you knowing the basic mechanics from other similar games.

The Giant Summons/Enemies:  If you've been reading my reviews you know that one thing I really like is gigantic enemies and Conan Exiles delivers with their new religion system. Play far enough into the game and you get the chance to pledge your allegiance to a god who can help you during battle and it's a pretty damn cool sight. Unleashing your deity buddy at the right time can be the difference maker between winning and losing a fight...between dying and surviving.  Seeing these gigantic creatures storm through the battlefield, wrecking everything in their path is almost awe-inspiring, unless of course they're coming for you, then it's time to panic.

The servers are well populated:  If there's one thing that makes or breaks a game like Exiles, it's whether the player base is dedicated enough and luckily enough, there seems to be a great and growing base of players here. While playing for this review, I never ran out of people to see or servers to explore. Exiles very much seems like a word of mouth type game and it's only going to get better the more people hear about it and start playing. 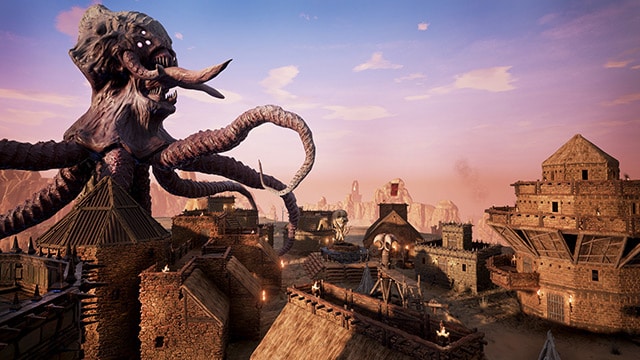 It's expensive for an early access game: At $30, Conan Exiles would normally be a steal of a purchase...if it were a finished product. Right now, the game is in a very unfinished state and that $30 price tag seems a lot steeper. Like normal, you can expect bugs to pop up, and do so pretty frequently. I didn't run into many game breaking bugs while playing for this review but it's important to note that you have to be comfortable with the game in it's current state, and as we've covered before that it may never fully release. The good news though is that the developers have been consistently pushing updates that address a number of the game's major issues and they show no signs of stopping anytime soon.

The AI isn't the smartest: By far though, the biggest issue with the current build of Conan Exiles aren't the bugs or unfinished visuals, it's the lackluster and sometimes non existent enemy AI throughout the game. More than once I was attacking an enemy and expected them to put up a fight but they didn't, they just kind of stood there. Well, they put their hands up above their head but they just stood there.  This didn't happen all the time and there was moments when everything worked very well but it being this unpredictable isn't good for the game at all.

Conclusion Conan Exiles has a chance to stand-out in the increasingly crowded open world survival genre but it has a ways to go to do so. Filled with great ideas and mechanics, Exiles needs to fine tune everything it does to reach it's potential. It does come with a hefty price tag for it's current early access state but you can't help but get the feeling that this will be one of the biggest games of the year when it's finally finished.

Overall: 7/10
Presentation:
8
Gameplay:
7
Lasting Appeal:
7
CHEATfactor:
9
CHEATfactor
CHEATS USED: Add Strength, Reset Hunger, Unlimited Sprint, more
Open World Survival Games like Conan Exiles ask you to monitor a lot but why not make it a little bit easier on yourself with the trainer for Cheat Happens. A huge and super helpful trainer, you get access to customizing and reseting nearly all of your vitals like strength, hunger and thirst as well as skills to take into battle like unlimited sprint and easy leveling up. It’s to survive, even in a rough world like the one of Conan when you’re using the trainer from Cheat Happens.