Our will shut-down on Dec 1. Last chance to get a LIFETIME OF LIFETIME PLUS and more.
We have 29,091 trainers for 7,073 Games. Get them all with Cheat Happens Premium!
LOGIN | SIGNUP

Welcome to our CHEATfactor Game Review of Batman The Telltale Series - Episode 1: Realm of Shadows. We review the game and then factor in how the available cheats affect the overall game experience. For better or worse, our reviews will help you decide whether or not to use cheats when playing the game.

Everyone wants to be Batman, myself included. He's dark, he's brooding and he's able to standup to injustices in a way that most other superheroes couldn't even dream of. What I never understood though is why more people don't want to be like his alter-ego millionaire playboy Bruce Wayne. He may not strike fear in the hearts of evil but he's got the cars, the house, the girls and of course more money than he knows what to do with. The new Batman game from Telltale games, the studio behind games like The Walking Dead and Tales from the Borderlands aims to bridge that gap by having you make choices as both the heir to the Wayne Empire and the Dark Knight. If Episode 1 is any indication, it's one of the best interpretations of both characters that you'll ever see but you can't escape the fact that the game is being run on an engine that's more than showing it's age. 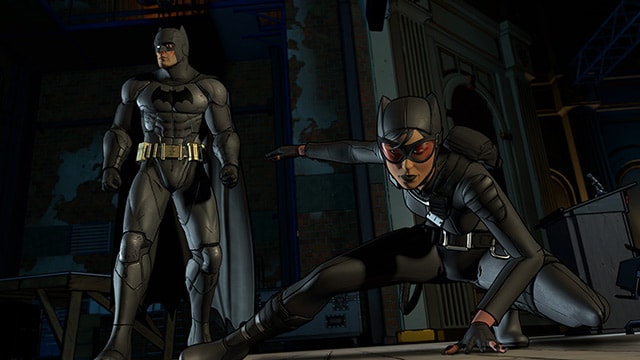 Episode 1: Realm of Shadows begins in a pretty peculiar place. Batman is an established figure in Gotham and the criminals fear him but you'll see the first introduction of a few different essential characters like Catwoman and other villians. On the domestic side, things for Bruce Wayne aren't any calmer; Harvey Dent (that's pre-two Face Harvey) is running for Mayor of Gotham and Bruce is his biggest financial backer. The game is essentially split into two different and very distinct sections; those where you play as Batman and those where you play as Bruce. Together they form one of the most true to life interpretations of the hero's dueling personalities and both Telltale's long established episodic format and cell-shaded visual style work well here giving the game a unique comic book feel that you wouldn't get in a full fledged release.

The Bruce Wayne sections of the game should feel familiar to anyone who has played any of the previous games from the developer. Walk around, interacting with things, making decisions and then regretting them. Most of Bruce's decisions aren't life altering but they are important. Do you do business with mob boss Carmine Falcone in an effort to help Harvey's chances of getting elected, knowing that the press will eat you alive for it?  How do you respond when someone asks you how you got that giant cut on your chin, you know…the one you got from that rooftop battle with Catwoman? What's best for Bruce? What about Gotham? How will it effect the city's perception of not just Bruce but how will it effect his night job fighting crime? Though the game does go out of it's way to remind you time and time again of established Bat-facts like how Bruce's parent's died and it becomes a bit of overkill before the episode ends two hours later, Telltale did do a good job recreating what I can only assume it would be like to be Gotham's most famous son.

The Batman sections are a different beast though. Most similar to Telltale's other DC Comics game The Wolf Among Us, playing as Batman is essentially quick time event focused fights and investigations. The game does give you a bit of freedom to let you be your ow Batman in a way as you'll get several choices on just how far you'll go with criminals to get information out of them. One of my favorite sections in the game had me interrogating a thug; he was strung upside down in a warehouse and I had his arm and elbow firmly in my grasp, applying pressure. I've always been of the mindset that though Batman won't kill you (I'm looking at your Batt-fleck), he will do everything he can to make sure that you don't try to break the law again, and that means breaking a few arms. So I snapped it and as Batman quipped as he walked away “Try to hold a gun again.” As a result Bats was portrayed as this larger than life figure that criminals will fear, and that's the Batman that as a comic book fan, I love. 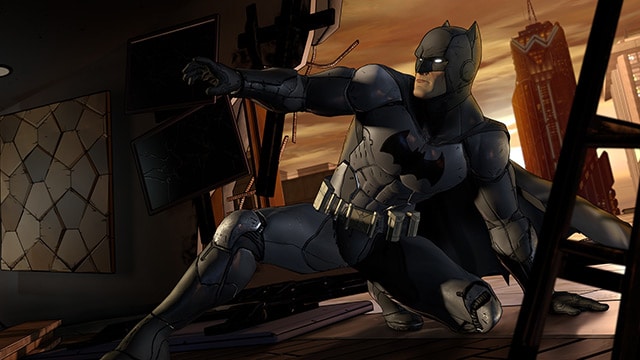 There's no debating though that all of this takes place in a very dated game engine. Telltale's Batman series uses an engine that is pretty much the same as the first season of their Walking Dead game which came out almost half a decade ago, with a huge amount of games using it;  and it's showing it's age. Moving your character in investigation sections is still a headache thanks to the camera and regardless of whether I was playing on console or PC there were plenty of slowdowns where the frame rate just dropped to unacceptable levels. The PC version is the worst offender of this though as upon release it was almost unplayable due to glitches and terrible frame rate dips, which seems to have been fixed thanks to recent patches.

This last issue I have with the game is a bit of nitpicking but as a long time Batman fan I'm sure I'm not the only one who's been having it. I just don't buy a lot of the voice actors. Batman for example is voiced by veteran voice actor Troy Baker  (Booker from Bioshock Infinite, Joel from The Last of Us) and he does do a fine enough job but he's not Kevin Conroy who did the character's voice in a number of Batman properties including the Arkham Games and The Animated series. To me, that is Batman's voice and while I'm sure I will get used to Baker's take on the character, I thought about every single time either Batman or Bruce Wayne spoke and that's a good majority of the game.

If the first episode is any indication, Telltale's Batman game seems to be off to a great start, and is a unique and remarkable recreation of both the Batman and Bruce Wayne characters. You won't be able to escape the fact that the game plays on a dated engine that is more than showing it's age but you'll still have fun with the latest incarnation of DC's Dark Knight.

Overall: 8/10
Presentation:
7
Gameplay:
8
Lasting Appeal:
6
CHEATfactor:
7
CHEATfactor
CHEATS USED: Slo-Mo QTE, Super Speed, Freeze Game, more
The trainer for Telltale’s Batman series is very similar to every other trainer for a Telltale game. Slow down the decision timer or quick time events or speed things up. There aren’t a ton of options but what’s here will give you a lot more freedom and more importantly a lot more time to make those decision that you’re going to regret anyways.