CHEAT HAPPENS RELEASES WORLDS FIRST TRAINER WITH RGB SUPPORT. NOW YOU CAN SEE WHAT CHEATS YOU HAVE ENABLED!
We have 27,298 trainers for 6,747 Games. Get them all with Cheat Happens Premium!
LOGIN | SIGNUP

Welcome to our CHEATfactor Game Review of Hue. We review the game and then factor in how the available cheats affect the overall game experience. For better or worse, our reviews will help you decide whether or not to use cheats when playing the game.

Not enough people are going to play Hue. That's a shame though because it's one of the most inventive puzzle/platform games I've played in quite some time. Taking familiar mechanics and twisting them just enough to create something completely it's own, Hue is one of those games that you don't expect much of going in but are wowed once the credits rolled. It's almost deceptively simple but there's more to Hue than you likely expect. Right on the heels of the busiest time of the year for new releases, Hue comes in and while it may not change everything, it does make a strong case not to be ignored.

Hue lives in a world dark world of grey, black and white. The game puts you in the virtual shoes of Hue (because why not?), an everyday guy who of course finds himself in the middle of something bigger. Hue lives in a world dark world of grey, black and white. Through playing the game you'll find fully voiced letters from Hue's mom that reveal that she was a scientist and created an object known as the Annular Spectrum, a ring which essentially let's colors be changed or altered. Eventually, her assistant Dr. Grey betrayed her and tried to steal the Annular Spectrum but it was damaged in the process, sending the colors to be lost, the world to turn grey and Hue's mother to turn invisible. Hue must then recover the lost colors, find his mom and return the color to the world for all.

At it's core, Hue feels like many of the platformers you've played in the past, you'll run, jump and collect things but it's got more than a few tricks up it's sleeve. Hue's big draw is that you'll use the colors you unlock to solve most puzzles in the game. It's easy in the beginning as you'll only have one or two colors that you'll have access to, and solutions are pretty obvious but the more and more colors you'll unlock, the more difficult things get. You see, picking a color not only turns the entire background that shade, but also makes anything on the screen that's the same color disappear. Towards the end of the game you're rapidly switching between colors in an effort just go get from point a to point b. It get's really challenging but it can also be very rewarding when you finally solve that tough puzzle that's been giving you trouble. While Hue can become very tough, I never felt like the game was being unfair with it's difficulty level as it took the time to explain the way the game's world worked before ramping things up.

I was also pleasantly surprised to see that Hue is much deeper than it initially lets on. It's minimalistic style (think of it as  happier version of Limbo) is artistic but it hides some pretty dark themes. After you unlock a color you can go back through certain levels to find sections that were off limits to you before but can now be cleared because you have the right color. While there's not really much to find in terms of collectibles in Hue, what is here is remarkably special. If you're willing to look hard enough you can find more and more letters from Hue's mom, and they touch on some surprising topics. You wouldn't know it by looking at it but Hue is a game that deals with love, loss, consciousness and even your basic perception of each of these things. You can tell that the developers had something to say when making Hue and the result is a seemingly truly personal experience.

...very little reason to go back once you've finished... 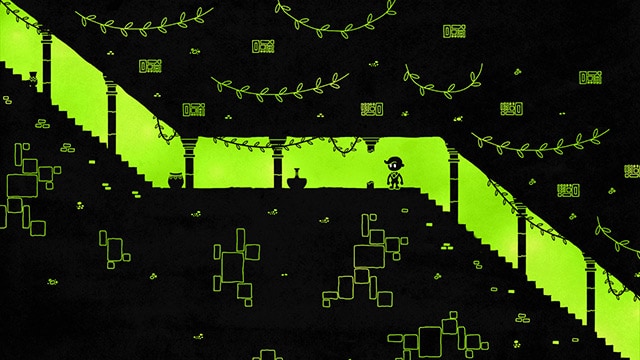 Hue isn't the type of game you'll be spending months playing and there's very little reason to go back once you've finished, assuming that you care enough to find all of the letters. I finished the game in about six hours or so, allotting more time than I compare to admit to figure out some of the game's puzzles. I wouldn't mind seeing a developer commentary included in a future update since the game seems so personal to the people who made it. I do have to give the development team credit though for including a color blind mode to their game, which includes a specific symbol each time a certain color is used.

Right on the cusp of the busiest time of the year for the gaming industry, Hue makes a clear case for itself as sort of the little game that could. Priced at $14.99, Hue is something that I can't recommend enough to people looking for something to occupy a lazy night or two at home. It's an easy to grasp but tough to master experience that dares to do something different.

Overall: 7/10
Presentation:
8
Gameplay:
8
Lasting Appeal:
5
CHEATfactor:
0
CHEATfactor
As of this writing there are no known cheats or trainers available for Hue. Stick with Cheat Happens for more as they become available!