INTERESTED IN WAGERING ON E-SPORTS? BETUS IS OFFERING A A RISK-FREE BET FOR NEW PLAYERS!
We have 27,291 trainers for 6,746 Games. Get them all with Cheat Happens Premium!
LOGIN | SIGNUP

Welcome to our CHEATfactor Game Review of WWE 2K17. We review the game and then factor in how the available cheats affect the overall game experience. For better or worse, our reviews will help you decide whether or not to use cheats when playing the game.

Wrestling fans know the pattern. Week after week WWE TV is boring and uninspired. You see the same matches and the same angles with the same faces and the same outcomes — but yet you have to keep watching. Every now and then we get an episode of Raw or Smackdown that’s going to have people talking and remind you why you love this silly “sport.” The WWE 2K series has been similar lately and WWE 2K17 is that episode you’ve been waiting for. It’s a sandbox for wrestling fans to realize their squared circle dreams and gives fans a ton of content, even if a key mode from previous years is missing. Most importantly though the actual in-ring product hasn’t been this good in years and it’s once again a lot of fun to step into the ring. 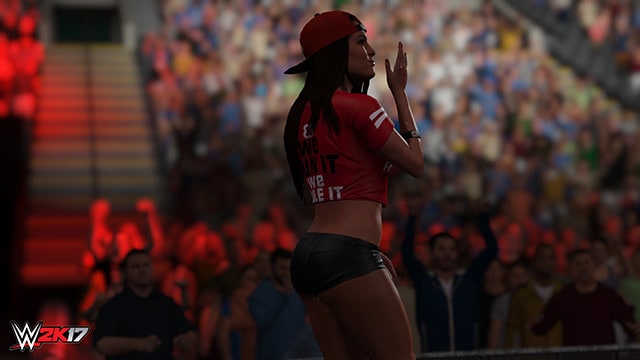 WWE 2K17 delivers a much better, much more crisp in-ring product than any WWE game in the current series.There’s a general flow to matches that makes them feel much more like what you’d see on TV than in previous games. In the two most recent games there would be this weird robotic pause between moves, which is almost non existent in 2K17. The characters move and act much more like their real life counter-parts now, and playing as someone like Finn Balor feels much different than playing as someone gigantic like The Big Show. This is thanks in part mostly to some fantastic animations that truly capture how each wrestler moves and acts in the ring. Of course, little guys can still throw the heavy weights around so it’s not perfect.

While most of the core gameplay of the WWE games remains intact but with new and improved systems that go a long way in creating that much more fluid gameplay. The key addition here is the return of the old reversal system that leads to a much more strategic sort of gameplay. For most moves your opponent can deliver you have the choice of a simple or strong reversal that needs to be perfectly timed, a smaller reversal can give you a few seconds to go on the offensive but a strong reversal can swing the pace of the entire match after reversing moves like top rope moves or finishers. It’s a lot harder to spam the reversal system now, even if the AI controlled wrestlers are still stupid good at reversing pretty much every move you throw at them on the higher difficulties.

Similarly, much of WWE 2K’s systems have been tuned and tweaked for better performance in WWE 2K17. The submission and chain wrestling system now feels much more responsive than it did in previous games and the mini games are actually a lot of fun once you get the hang of them. Ladder matches have also been fine tuned to ease some of the frustration players can have. In previous games you could set the ladder up pretty much anywhere but unless you were in the right spot you couldn’t get the belt dangling over the ring (or briefcase), but in WWE 2K17, you can only set the ladder up in certain spots so there’s much less of a guessing game. It admittedly does take a bit of the unpredictability out of the mode but the game does allow you to set up the ladder is some pretty fun spots to deliver those “this is awesome” moments where you have to watch the replay over and over again.

Though the game is missing the showcase mode from previous games and it’s a notable absence, WWE 2K16 is still packed with content. You can of course complete in every match type imaginable with any amount of people, be it single player, online or with good old couch co-op but the heart of WWE 2K17, like the games before it lies in it’s larger modes. My Career Mode, which finds you leading your created superstar from developmental leagues to the Hall of Fame makes it's return this year, with a ton more options and criteria to meet, like T-shirt sales goals you’ll have to meet. Like the previous years though, I’ve been spending the vast majority of my time in the Universe mode, which essentially allows you to fantasy book your own version of the WWE with you picking the champions, the shows, the feuds and more. This year’s Universe Mode has also been tweaked and you won’t have the same matches week after week with the inclusion of promos and much more control over interference. The mode is perfect for fantasy bookers like myself who think they can write a better storyline than what they see on TV. This year also sees the return of brawling in the crowd and fighting backstage, two welcome additions to the formula.

There are also a ton of legends in the game... That same depth of content is also evident in the selection of playable wrestlers in the game. Of course, all of today’s biggest names like John Cena and  Roman Reigns but 2K17 also comes packed with a literal who’s who of the WWE’s past and present. With the addition of  stars like AJ Styles, Shinsuke Nakamura and more, the WWE roster right now is incredibly deep and that’s never been more evident than in WWE 2K17. There are also a ton of legends in the game, from guys like Sting and the Nature Boy to Andre the Giant and even more contemporary legends like The Outsiders and Bam Bam Bigelow. Most of the models looks great, with characters like Finn and Bret Hart being absolute standouts, but some aren’t so lucky. Dana Brooke for example looks like a straight up vampire and Bailey, who’s gimmick is that she’s always happy and smiling looks like she’s forced into every match she’s put into.

Of course, the size of the roster doesn’t really matter when you take into account the ridiculously deep creation engine. Remember what I said before about fantasy booking, WWE 2K17 doesn’t just allow it, it begs you to let loose. You can create nearly anything here, from wrestlers to arenas, championships and even shows, complete with intros and video packages.  The community creations mode returns again this year and it allows players to upload their creations for others to download. I made an entire Ring of Honor show and it’s fully customizable and playable in WWE 2K17. Can you imagine any other sports game doing that?

Then there’s the commentary. If you’ve played any of the previous games you won’t be surprised to know that it is absolutely terrible but this year it seems to have hit a new low. Regardless of which show you’re playing on, Michael Cole, Jerry “The King Lawler” and JBL provide commentary and I lasted one match before turning it off completely. Everyone sounds completely bored and I’m pretty sure lines are chosen at random; Like someone is pulling a lever on the speak and say and whatever comes out is what comes out. There are times when the commentary doesn’t even make sense like after doing a move ten times Michael Cole will yell about how that’s the first time we’ve seen “that maneuver” today and I’m pretty sure there was a time when I actually heard JBL eating a sandwich during the recording process. What really bugs me about the commentary in 2K17 though is how little it cares. You could be in a world championship match at the main event of Wrestlemania and they’ll treat it pretty much the same as they would any match on any weekly TV. Sports game commentary has gotten better in recent years but somehow WWE 2K17 has gotten worse.

WWE 2K17 bucks the Trend of recently released WWE games being sub-par and delivers a remarkably fun and depth filled game for this year’s release. There's a ton of content to play around with and most importantly the in-ring product is better than any game in recent memory. If you’re even a casual fan of WWE and wrestling in general, this may be the year you come back to WWE Games.

Overall: 8/10
Presentation:
7
Gameplay:
8
Lasting Appeal:
9
CHEATfactor:
0
CHEATfactor
As of this writing there are no known cheats or trainers available for WWE 2K17. Stick with Cheat Happens for more as they become available!