ALL NEW TRAINER MANAGER 2.0 HAS BEEN RELEASED AND IS NOW AVAILABLE FOR DOWNLOAD!
We have 27,029 trainers for 6,698 Games. Get them all with Cheat Happens Premium!
LOGIN | SIGNUP

Welcome to our CHEATfactor Game Review of Anarcute. We review the game and then factor in how the available cheats affect the overall game experience. For better or worse, our reviews will help you decide whether or not to use cheats when playing the game.

The first few times I played Anarcute, I didn’t get it; in fact, I downright hated it. The music, the visuals, the gameplay; it just wasn’t for me I thought. Somewhere in between then and now though something started to click and I started to enjoy my time with the cutesy anarchy similar. Don’t get me wrong, it’s repetitive and surely isn’t for everyone but there’s more to Anaracute than the game initially lets on and at only $14 it may be worth jumping in to smash some windows with your favorite animals, just don’t expect a lot from it.

...which leads to the game’s cutesy visual style. 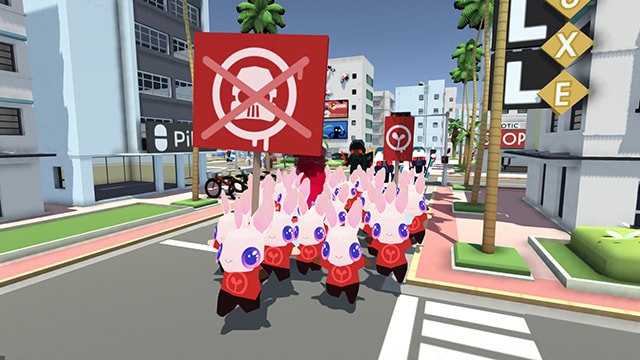 An evil corporation has set out to brainwash the people of the world and it’s up to a small group of activists to raise awareness and ultimately stop them. To hide their identity  and easily identify each other, the activists don animal masks, which leads to the game’s cutesy visual style. Trust me, if you’ve never seen a bunny and an alligator lay waste to a cartoon city that in itself may be worth the price of admission. Don’t expect a ton of visuals details though, the whole thing ends up looking like a cheesy flash animation thanks to it’s low level of detail. The cutscenes are a little better and have a definite anime feel to them but still aren’t anything special.

Your goal in Anarcute is simple, cause havoc and be a pain in the ass for the establishment. You’ll start out with one rioter and quickly grow your ranks as you progress through major cities like Tokyo, Miami and Paris, the more rioters you have on your side, the more damage you can cause. A larger group of rioters means that instead of just lifting a bench you can left a car, which can then be tossed at enemies as they approach you. Anarcute introduces simple combat mechanics that allow your to fight off police and military but if your group of protestors take too much damage and you lose all of your troops it’s game over. The problem is though that there’s no real strategy to dealing that damage and you’re just mashing the A-button with no real way of defense so it just becomes more a matter of luck than anything else. 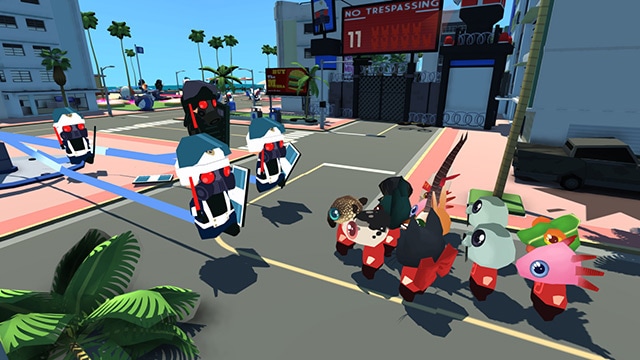 It’s all pretty simple stuff, get from point a to point b with as many protestors as your can but there’s a surprising amount of depth that unlocks as you play through the game. Most stages unlock a new move to use against the corporation like a powerful stomp that can move entire buildings and tanks. The game also mixes in new gameplay elements from time to time like boss fights and stealth missions but they do little to differentiate the monotony of the repetitive gameplay. The majority of the stages feel the same; go here, pick that up, throw that and break that. Even the bigger set piece moments, like blowing up bigger landmarks in the world don’t do much.

You can replay through missions in order to get a higher rank if you’d like and there are plenty of unlockables to find throughout the game. One of my favorites was the ability to customize your squad of protestors so you can finalize realize that goal of seeing a group of twenty pugs level an entire city. Even with all of that though I can’t say I have much interest or reason to go back to Anarcute. It’s a fun but ultimately forgettable experience that you’ll likely forget that you have in your Steam library.

There trainer for Anarcute from Cheat Happens doesn’t feature many cheats but it does feature two that work very well together. How about infinite health and blind cops? Jut think of the possibilities, an invincible army of animals fighting off blind police offers. Now that’s something you can’t argue with.

Stick with Cheat Happens for more on Anarcute!