SUPER BUNDLE!  A LIFETIME OF LIFETIME PLUS, 2 MILLION RC, 50 WHEEL SPINS, TIER 7 PLUS FREE CH HOODIE!  Giveaway!
We have 31,773 trainers for 7,557 Games. Get them all with Cheat Happens Premium!
LOGIN | SIGNUP

Welcome to our CHEATfactor Game Review of Homeworld: Deserts of Kharak. We review the game and then factor in how the available cheats affect the overall game experience. For better or worse, our reviews will help you decide whether or not to use cheats when playing the game.

More often than not when a new entry in a series releases almost twenty years after the original the results are less than spectacular but Homeworld: Deserts of Kharak proves that there's an exception to every rule. It's the rare game that pays homage to it's classic lineage but doesn't rely on it. Instead, it takes the formula established previously and puts enough of a unique twist on it to create a unique experience that somehow still feels familiar.  Even if you haven't played the original, there's something for every RTS fan to enjoy in Deserts of Kharak and it's something you should definitely experience, minor issues aside.

It's not the most revolutionary story... 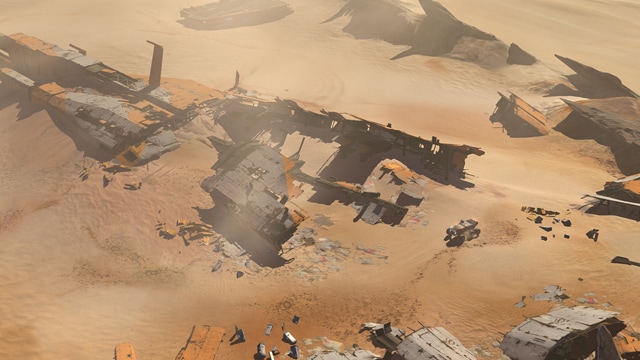 Deserts of Kharak takes place before the events of 1999's Homeward but it rarely feels like it's just trying to setup the events of the story thanks to dynamic characters are remarkable writing. Your society is clinging to life on a desert planet over ruled by the religious zealots known as the Gaalsien. The game's main character Rachel embarks on a do or die mission to recover an ancient artifact that could change everything and that's why the Gaalsien are willing to do everything to stop you and your mission. It's not the most revolutionary story but it's brought to life thanks well fleshed out characters that you'll not only care about, but care if they succeed or fail.

While interesting, the campaign isn;t without it's flaws. Most of the story's exposition is told through as series of post-mission briefings and info dump that seem more like a chore to read. It helps that they're delivered by mostly stellar voice acting but it can be a bit overwhelming when you're deep into the game. I also found that there was quite a bit of downtime once some of the battles were finished, like waiting for scavengers to finish mining for resources. There are also only two factions in the game, a paltry number compared to most modern RTS games but they're handled well enough here that you won't mind much once you get into the meat of the game.

This is definitely a game that encourages creativity and experimentation over simply building up your army as quickly as possible. While that strategy will always work, Deserts of Kharak allows you to think creatively and even a less powerful army can claim victory against a superpower by great positioning and strategy. Like most RTS games, Deserts of Kharak often becomes more of a question of timing and placement over size and artillery, but they don't hurt of course. The game heavily rewards players who can find the right balance between micromanaging their units and tactical action by giving out quick experience boosts that actually matter. Towards the middle of the game I had leveled up one of my weapons to a level the I felt nearly invincible and it was spectacular. 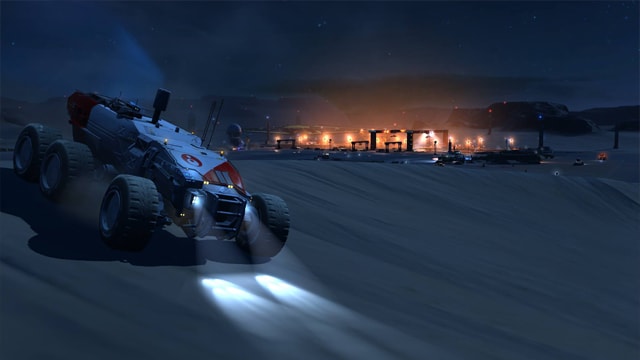 I often felt like Deserts of Kharak boiled the RTS genre down to it's most basic ideas. Take a game like Starcraft for instance, with upwards of twenty different unit types and compare that with the roughly seven that Deserts of Kharak employs. The fact that this game can do so much with so few is astounding. Nowhere is this more true than with your ship, which serves as your base of operations. It starts out slow and cumbersome, almost feeling like a chore to protect but as you progress through the game and outfit it with new technology and weapons it becomes a major component of your strategy and can eventually feel like an unstoppable war machine. During my time with Deserts of Kharak, I became nearly obsessed with making my base ship as badass as possible.

Battles in Deserts of Kharak are tactical and rewarding. Your enemies are relentless and challenging but I never felt like they were unfair or that I was up against something that I could not defeat, and that's important. I always felt like my next goal, my next victory was in reach, regardless of what I was up against. The game makes minute to minute resource management more important than skill-trees and upgrades which kept me in the middle of the fight and not toggling between menus. Most battles became frantic attempts to get my units in the right position at the right time. Did I fail often? Of course, but it just made me want to get back into the fray even faster. It helps that the game features remarkably realistic voice chatter and sound effects that sound great, especially when playing with surround sound headphones.

Homeworld: Deserts of Kharak quickly became one of my favorite RTS in recent years, and I spent a lot more time with it than even I thought I would. It quickly became one of those games that even when I walked away, I was still thinking about it, thinking about how to better align my armies. It's a remarkably deep game that does a lot with seemingly only a little. Perhaps most important, it takes the lineage from a classic series and uses it to create it's own remarkable legacy. Fans of the RTS genre will want to take the trip back to Homeworld.

Overall: 8/10
Presentation:
8
Gameplay:
9
Lasting Appeal:
8
CHEATfactor:
8
CHEATfactor
CHEATS USED: Reset Carrier Power, Repair Unit, Super Unit, more
In the opening portions of Homeworld: Deserts of Kharak, you'll hate your carrier; it's a weak burden, but you can fast forward to the point where it becomes more of a force for you instead by using the trainer from Cheat Happens. Featuring cheats like reseting carrier power and overheat, you won't have to worry, at least not as much as you otherwise would about the fate of your carrier. There are also remarkable cheats in here like unlimited units and the ability to instantly repair a unit. With the trainer from Cheat Happens, a great game becomes even better for Homeworld: Deserts of Kharak.