PERFECT FOR OUR FEBRUARY MONITOR GIVEAWAY, WE ARE OFFERING TWO DIFFERENT WAYS TO GET TO TIER 7!   Giveaways!
We have 32,871 trainers for 7,757 Games. Get them all with Cheat Happens Premium!
LOGIN | SIGNUP

Flame in the Flood, The Review
CHEATfactor Game Review by: Joe Sinicki
Reviewed on: PC

Welcome to our CHEATfactor Game Review of The Flame in the Flood. We review the game and then factor in how the available cheats affect the overall game experience. For better or worse, our reviews will help you decide whether or not to use cheats when playing the game.

The Flame in the Flood is a different type of apocalypse. Sure, there are the broken down cars on the side of the road and shuttered buildings but it's also an apocalypse made of vivid color and wildlife all wrapped up in a Tim Burton like visual style. It's an adventure that constantly had me on my toes predicting my next move but it's just a shame though that it's marred by a clunky menu system that serves as the heart of your experience. You've got a lot of options in the 'try not to die' genre that's emerging and The Flame in the Flood is different than anything you've played before, for better or worse.

Their goal? Simply stay alive against all odds. 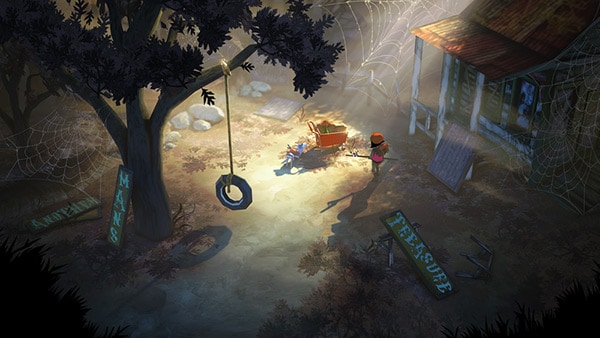 The game follows Scout, a young girl in a post society America and her dog Scout. Their goal? Simply stay alive against all odds. The country has been wrecked by a seemingly endless river that has swallowed buildings, taken lives and separating cities into island territories. The map is randomly generated so each time you play everything feels different and it gives the river a truly living feel. It's you against the river and it really feels like it in The Flame in the Flood as everything from the visuals to the superb score combine to make the river in The Flame in the Flood a truly formidable foe.

While most survival games are most concerned with building shelter and keeping out predators, The Flame in the Flood is more concerned with realistic goals like regulating your body temperature, keeping injuries down and monitoring your own mental and physical well-being. Don't get me wrong, there are still wolves, bear and other predators more than willing to rip you apart if given the chance, but there are much more important concerns here and it gives a new importance to scavenging and using your time wisely. The river's current is an unforgiving beast and will take you away from an island before you have the chance to fully explore and find the items you need from a handful of the available islands before it takes you away. This is part of the problem in The Flame in the Flood since once you pass an area it's gone for good,  you're so inclined to grab absolutely everything you see (thanks Fallout 4) but you're incredibly limited to what you can carry so you're forced to make some decisions and they'll more than likely come back to haunt you.

I get that the limits of what you can carry is part of what makes The Flame in the Flood more realistic but I always felt like I wasn't given enough space to even manage what the game was asking me to do. From using materials I find to upgrade my raft to using them to create medicines I desperately need and items like thicker coats and equipment to keep me alive. It's an admittedly frustrating but addicting exercise in not only time management but decision making and short term prioritizing. The game doesn't hesitate to show you were you made each decision and how it effected you either, as each time you die you're given a map that shows you each time you broke a bone, where you contracted a disease, where you were attacked by a bear and finally where you died. 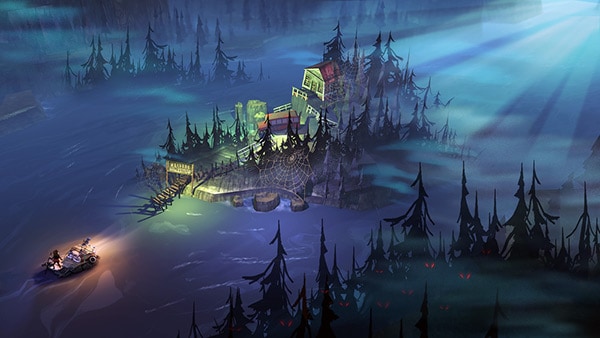 Much of your time with The Flame in the Flood will be spent micro-managing your inventory in a series of clunky menus that did nothing but take me out of the experience. Everything you can do in the game feels unnecessarily difficult and taxing. Why for instance is your inventory screen different than your crafting screen? Want to look what items you currently have to use? It's at one screen. Want to see how you can use it? It's at another. You're left flipping between menus to find recipes for resources and what you have. For a game that's built on building tension and creating drama, The Flame in the Flood seems insistent that you spend as much time in it's menu system as possible. During my play through on the PC version of the game I had a number of crashes happen from these menus which as incredibly frustrating because I felt like the game was unable to handle even the things I absolutely needed to do to survive in the game's world.

I had fun with The Flame in the Flood, almost despite it's best efforts. Each time I died I felt more compelled to jump back in and try to give Scout a better ending (spoiler: it's almost never a better ending). This is a survival game that tries, and mostly succeeds to do something wildly different with the growing genre but it's hampered by a clunky menu system and some game breaking crashes. The Flame in the Flood is a fantastic way to spend a few days but just be ready to question your every move.

Overall: 7/10
Presentation:
8
Gameplay:
8
Lasting Appeal:
8
CHEATfactor:
10
CHEATfactor
CHEATS USED: Unlimited Items, Unlimited Fatigue, No Thirst, more
Nearly every feature in the trainer for The Flame in the Flood from Cheat Happens was incredibly useful and some even made me enjoy the game even more. Adding the ability to have unlimited items was huge, and so were cheats like the ability to edit things like your body tempt, thirst, hunger and fatigue. Who cares about the apocalypse when you're a perfectly generated specimen of humanity right?