GOING...GOING...  A LIFETIME OF LIFETIME PLUS, 2 MILLION RC, 50 PRIZE WHEEL SPINS PLUS FREE CH HOODIE!  Giveaway!
We have 31,698 trainers for 7,545 Games. Get them all with Cheat Happens Premium!
LOGIN | SIGNUP

Welcome to our CHEATfactor Game Review of Hitman. We review the game and then factor in how the available cheats affect the overall game experience. For better or worse, our reviews will help you decide whether or not to use cheats when playing the game.

Playing through Hitman, I couldn't decide if the game brought out the worst in me or the best. I'm murdering with reckless abandon in creative ways but even I'm amazed at the twisted things that cross my mind. With Hitman, Square Enix has taken the best of the previously released games and sifted through the issues to make something that feels both fresh and familiar at the same time. Gone are the transgressions of previous games like Absolution in favor of the classic gameplay that made the Hitman games so fun to begin with. It's just a shame though that the developers thought it was necessary to force an always online component on the game, which can drop you from the game at the absolute worst times.

Here killing is an art form... 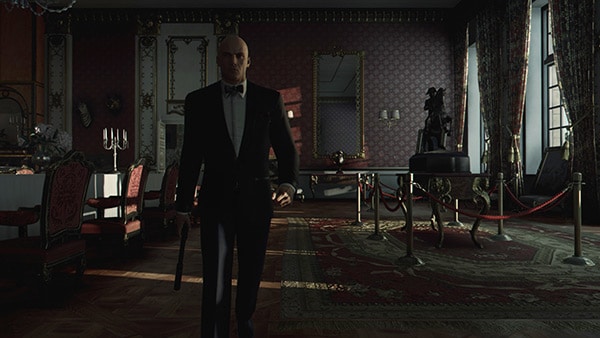 If you've played any of the previous Hitman games before you'll know what to expect here. You'll get a target, a location and not much more instruction but your job is clear - eliminate them at all costs. Sure, you could just walk right up and shoot them if you're brazen enough but that's not what Hitman is about. Here killing is an art form and you'll have an impressive amount of mediums from which you can paint your masterpiece. Do you sneak in the shadows to your location sight unseen or steal a guard's uniform to access restricted areas without much push back? Every time I played Hitman I would find a new area, or a new way in or some new item that opened up a world of possibilities to complete my goal. This is one of those games where you often think "can I do this?" and you find that you can, with often amazing results.

The biggest change from previous editions of Hitman to this one is the episodic release schedule. The first episode (available in a $15 intro pack or a full price, full season download) comes with two tutorial missions and one actual one. While that doesn't sound like a lot there's a huge amount of replayability here due to the game's open world murder playground. Each time you complete one of the missions you're given something new like a new weapon, customs or starting point that opens up a ton of possibilities. This does mean that you're going to need to be okay with playing the same levels over and over but I found myself surprisingly ok with that idea given how quickly I was finding new areas. The two tutorial missions aren't very inspiring since they are literally sets, complete with actors playing roles and cardboard props but the main mission; that's a completely different story.

As a guy who's played through each Hitman game, episode one's main level which is set in the midst of a Paris fashion show has easily become one of my favorite of the entire series. It's glitzy and glamorous halls are a set piece for what the series can truly be on the current hardware; they're brimming with personality and most importantly possibilities. My first play through I finished the level in about thirty to forty minutes, but that was using the most obvious path. I had a lot of fun going through the level and experimenting with what I could do, if I could go down another path, or sneak into another area.  I found myself giggling with delight each time I found a new possibility and that experimentation is rewarded by a series of challenges that also serve as hints for just what you can do.

Much of the AI is improved from recent releases as well. You'll still be noticed by people in the costume as you, especially those who seem to be in charge in any way (security guards for instance will give you an awkward eye if you walk past them and they don't know you) but thankfully the problem of you being noticed by nearly everyone who gets a good look at you feels mostly resolved. I was also impressed with how much life was  given to a lot of the NPCs, even the ones that are solely there to be in the background. Everyone feels like they're living life with a purpose, not just to be there as a possible diversion for my escapades. Thankfully much of the last Hitman game Absolution has also been scrapped in favor of a much more simple and much more rewarding system. You're no longer tied to a strange point system for when you can do things; much like the classic Hitman games…if you can get away with it, you can do it.

...a lot more fun once more content is released for the game. 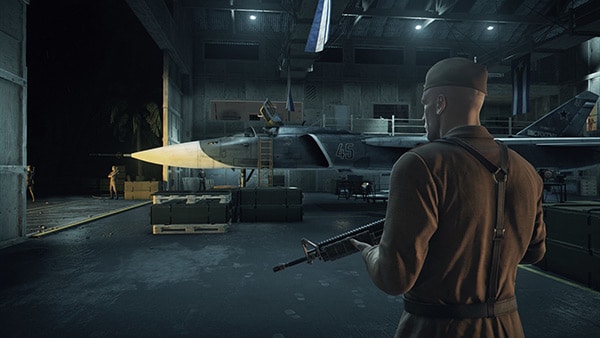 The one thing I'm glad that returns from Absolution is the Contracts mode, though it does feel a bit underutilized in it's current state. Contracts lets players create their own missions inside the levels already crafted for the game. You could for instance make the target a random guest at the fashion show or even a guard. It's a lot of fun to see what other players can come up with but with the lack of actual content here, it's really just another reason to go back into a level I've already played to completion multiple times. Don't get me wrong, I had a lot of fun with Contracts, and continue to do so but it will be a lot more fun once more content is released for the game.

For some reason though the developers have found it necessary to include an always online requirement for a strict single player game. Hitman also had a number of server issues when the game first launched, adding up to a frustrating experience for anyone looking to play the game when it was first released. I played without much problem until the absolute worst time for a problem, going in for the kill in the Paris level. I sat, staring at the screen, which was now back at the main menu for a few minutes before cursing Square's name.

You'll be amazed at how much actual content you'll get in Hitman's first episode, but you'll also be clamoring for the next installment of the game. Save for the always online issue, Square has crafted a rebirth of sorts for the Hitman franchise, and it at once feels fresh and familiar. I love where Hitman looks like it's going and can't wait for the next episode; now if you'll excuse me, I've think I saw a statue that can be pushed over on to a target somewhere over there...

Overall: 8/10
Presentation:
8
Gameplay:
8
Lasting Appeal:
8
CHEATfactor:
9
CHEATfactor
CHEATS USED: Unlimited Health, Invisible, Silent, more
Being successful in Hitman means doing what you can with the opportunities you've been given but why hope for that when you have the trainer from Cheat Happens? Unlimited health and ammo are of course helpful but with cheats like being invisible and being silent, this is easily one of the best trainers I've used in a long time. Combine that with cheats to give all devices and tools and you're like the kid on the playground with all of the new toys. I especially liked using a lot of these cheats to experiment with just what I could do in Hitman.