Welcome to our CHEATfactor Game Review of No Man's Sky. We review the game and then factor in how the available cheats affect the overall game experience. For better or worse, our reviews will help you decide whether or not to use cheats when playing the game.

There was no way for No Man's Sky to not disappoint in some way. After years of hype and promises, expectations for Hello Games' galactic simulator were beyond the stars. Now the finished product is finally in our hands and the result is...well, that's not really an easy question to answer. No Man's Sky is a more ambitious experience than anything I've ever played and the scope and scale of the universe built here by Hello Games is something to behold but as a game, the currently released product is less successful. It constantly feels like it's aiming to show us the stars but fails to establish an identity all it's own. You still need to experience No Man's Sky, if only to understand the mind-blowing scale that such a small team built and in hopes that the main experience will be updated to a more cohesive experience over time.

...everyone starts off a different planet... 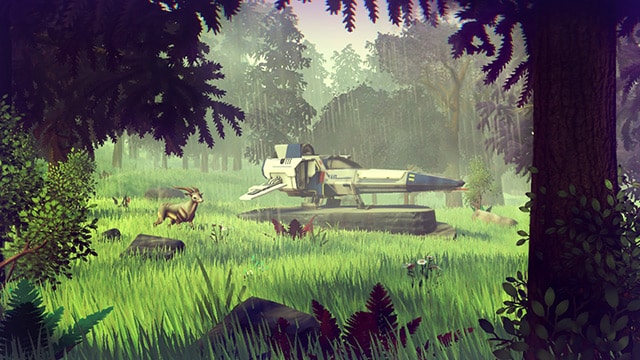 In No Man's Sky everyone starts off a different planet; there are like eighteen trillion of them or something like that. Each planet has it's own ecosystem, weather, animal and plant life. Mine for instance was an arctic planet that was sucking the life out of me and everything on it wanted to kill me; I named it after my ex-girlfriend. My goal was simple, at least in theory; find the materials needed to repair your spaceship and get back to exploring the cosmos. No Man's Sky gives you a nudge in the right direction but you're pretty much free to set off in whatever direction you want to find these elements and whatever else may be waiting for you. Now understand that these maps are huge and this isn't like a game like Grand Theft Auto where there are monuments to keep you on the right path, so the first time I played I spent too much time searching in the open air and my life support system gave out, causing me to die a harsh death. The second time I experimented more with the elements that I found and used caves for shelter from the cold, eventually finding a way back to the sky.

That in essence is what playing No Man's Sky feels like, a lot of guess work and a decent enough amount of payoff when you get the ah-ha moment and you figure it out. No Man's Sky is intentionally vague and wants you to experiment and figure things out on your own. The development team has stressed that they want to truly recreate the feeling of stepping foot on an alien planet with no idea what anything is, and they've succeeded but to what extent?From different plants and animals to different plants and materials and what powers what system, there is a lot of content here and there's a good chance that the average consumer may view it as too much.For example, I was exploring a planet once and found a stone that taught me an alien word for caution but there are so many alien races here and No Man's Sky doesn't do a good enough job at differentiating these races from each other for me to note what word means what.

A good portion of No Man's Sky is resource management; you're going to go through each world and using your mining beam, you'll collect elements and materials that can be used for different things like powering different aspects of your ship or your space suit. Nearly everything needs something to power it or upgrade it to a point where you can use it. Your launch thrusters need plutonium while your beam needs zinc. You can switch out certain elements in a pinch for less power so there's some room for improvisation here but to be honest I couldn't help but feel like the worst astronaut ever. Ok, I get it, you want me to experiment with different elements and technologies..fine, but I'm an astronaut that doesn't know the science behind my own technology? I don't know what powers my own suit?

No Man's Sky's gameplay feels like a combination of combination of Minecraft and Destiny and you're constantly juggling the elements that you've collected, struggling with the limited amount of inventory space you've been given. You'll start out with around eleven spaces in your suit, and an extra few in your ship which you can easily warp things back to but as you play through the game you'll be able to upgrade to more spaces. While that may seem like a decent enough amount in most other games, literally all you're doing in most cases is mining for these elements, so they fill up quickly. You'll also collect little trinkets that can eventually be used to trade with aliens for things like blueprints for technologies or useful resources but you're constantly going to trying to figure out what you need now versus what you can do without.

No Man's Sky is worth all of it's problems and inconsistencies... 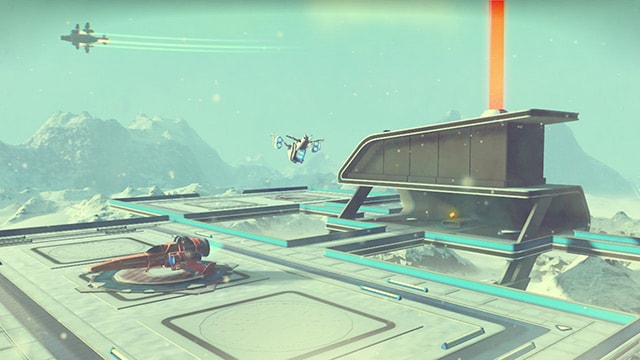 Make no mistake about it though, No Man's Sky is worth all of it's problems and inconsistencies because of it's incredibly impressive scale. The game boasts nearly eighteen trillion unique planets to to explore and there's a good chance that you'll see a ton of content that no one else will ever see, let that sink in. Each planet has it's own unique structure, ecosystem, animal and plant life. I've seen earth like planets, volcanic planets and ones that were just water. I've met aliens and animals that look like walking pineapples, a T-Rex with wings and a hippo that I'm pretty sure had his reproductive organs on his head.  What's perhaps more impressive is that you can travel to these planets, from space to ground and back again with no visible loading delay. It's this allure that has me to spending hours with No Man's Sky, and keeping going back. I will say this though...the more I play, the more the planets start to look the same but that hasn't stopped me from exploring further.

There are more things to do in space, like visiting big freighter star ships that serve as trade posts and markets to obtain resources for your journey and dog fighting, which handles surprisingly well. Dog Fighting with other ships became one of my favorite things to do in No Man's Sky and it was remarkably rewarding to shoot down ships that were pursuing me.  There were some visual issues here that popped up in certain spots like the ability to clip into boulder or other obstacle and a planet not filling out entirely until i got close to it. Elements like this sort of made the game feel unfinished and hopefully they're patched before long.

The team at Hello Games has promised that they're adding new features like base building and the ability to own one of those giant star ship freighters and if they can keep adding to No Man's Sky it can easily be one of the best games of the year, but as it stands No Man's Sky is a mixed bag in the gameplay department. You still should experience it though, just to appreciate how remarkable the world is that the developers created.

One of my main problems with the current No Man's Sky experience is just how much it forces you to micro-manage everything, like I just want to explore and not worry how low my zinc level is. The trainer for No Man's Sky from Cheat Happens makes this a possibility with some great features like god mode, unlimited stamina, resources and a lot more.

Using the cheats in this trainer I found myself enjoying No Man's Sky a lot more as I could just explore more of the map without worrying about where I had to be and what I needed to find. The only other thing I think I would want is a teleport option so I could teleport back to my ship after exploring.